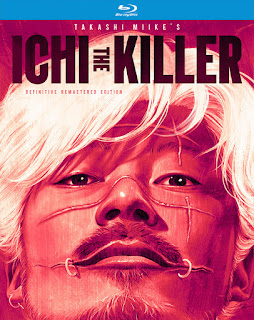 Here's something that'll never happen... an American remake of Ichi the Killer, promoted with a gloriously misleading poster featuring Mark Wahlberg & Jeremy Renner, arms crossed and standing back-to-back beneath the tagline: These two give new meaning to Here Comes the Pain!

Anybody who's ever seen Ichi the Killer knows it's too bonkers to ever be effectively remade. For better or worse, this is a one-of-a-kind film. To make even minor narrative, stylistic or tonal changes renders any notion of a remake ridiculous (just ask Spike Lee). In that respect, I suppose it puts Ichi the Killer in the same company as Jaws.

Not that the film is a similar exercise in cinematic artistry. I think many Takashi Miike fans would concur that much of the director's appeal lies in his gung-ho audacity. Along with the equally-insane Audition, Ichi the Killer remains his magnum opus, a whacked-out assault on good taste that has earned a notorious level of international infamy that few other Asian cult films have achieved (even all these years later, it is arguably the Gone with the Wind of WTF?).

Cult classic credentials notwithstanding, Ichi the Killer's bipolar attitude and approach to its unflinching violence remains a bone of contention (for this writer, anyway). On one hand, the most graphic scenes of violence are so extreme and over-the-top that they border on surreal. That, along with some amusing performances (especially by Tadanocu Asano as the pain-addicted Kakihara), has the film approaching a level of black comedy that's a lot of brutal fun. The voyeuristic sexual violence, on the other hand, is depicted far more realistically and really tough to take.

Not that my reservations should dissuade anybody reading this, most of whom are probably already well-aware of the story and sick thrills in-store. This isn't Ichi the Killer's first Blu-Ray rodeo, either. It was first released in 2010 by Tokyo Shock. I've never seen that edition, but by most accounts, the video & audio quality was pretty shitty. That's no longer an issue with this nicely-restored transfer from Well Go USA. However, the new disc much lighter on bonus features...just an audio commentary, still gallery and trailer. Looks like some of you sick puppies planning to double-dip will have to hang onto both discs.