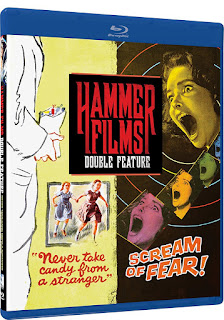 The latest in the Hammer Films Double Feature series is a mixed bag. While neither is a true horror film, one at-least contains elements of the the genre. The other, however, is not-only atypical Hammer fare, it's totally the wrong film to round out this double bill.

Scream of Fear is a moody, almost gothic tale in the vein of Diabolique. Susan Strasberg plays Penny, a wheelchair-bound young woman who returns home after ten years. She's told by stepmother Jane (Ann Todd) that her father is away on business. However, Penny keeps seeing Dad's corpse all around the property, only for it to disappear whenever she tells someone. The family doctor (Christopher Lee, in an early role) thinks Penny's hallucinating, but she's able to convince their chauffeur, Bob (Ronald Lewis), that something more sinister is going on.

The film takes its time establishing the scenario and players. In fact, the story drags at times before coming to life at the end with a couple of surprising twists. Scream of Fear won't make anyone forget Diabolique, but it's atmospheric and the performances are decent.

Never Take Candy from a Stranger is unlike anything released under the Hammer Films banner. First off, it isn't even a horror film, nor does it resemble one. It is, however, a disturbing and depressing cautionary tale of an old pedophile who accosts two little girls. When one child's parents report it to the police, almost the entire community (including the other child's father!) would rather to brush the incident under the rug because the old man is part of the town's wealthiest family.

Despite its age and how discreetly it handles the subject matter, Never Take Candy from a Stranger is tough viewing, and not just because the victims are children. Watching nearly every adult's apparent indifference is infuriating. For the most part, the film plays like a black & white Law & Order episode, complete with a lengthy courtroom scene. While there's nothing necessarily wrong with that and the film is tastefully made, I doubt this is what traditional Hammer horror fans have in mind.

Despite hailing from the same studio, these two films aren't really compatible co-features. Neither is bad, but as much as I enjoy Oreos and barbecue sauce, I wouldn't consider eating them together.

NOT BAD...BUT WHO THOUGHT TO PAIR THESE TOGETHER?
Posted by D.M. Anderson at 9:17 PM