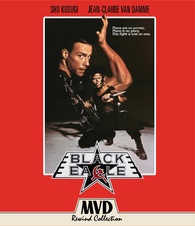 A plane carrying an experimental laser device crashes off-screen (shaving the special effects budget) in the Mediterranean Sea. The Americans need their best operative, Ken Tani (a.k.a. Black Eagle, played by Sho Kosugi) to retrieve it before the Russians do. He initially refuses because he wants to spend time with his family. But his superiors got his back: They send his two young boys to Malta with him, so now Ken's dangerous, deadly mission into hostile territory can be a work vacation!

Other than this hilariously lazy plot contrivance (the kids only exist to be put in peril), there's nothing particularly remarkable about Black Eagle. It was just one of countless generic, B-movie action-fests you used to find on any Blockbuster shelf. Respected martial artist Sho Kosugi lacked the on-screen charisma to stand out among his peers, and it probably goes without saying there's never been an Eric Karson career retrospective film festival.

Still, Black Eagle earns a footnote in action history for featuring Jean-Claude Van Damme in one of his first substantial roles. Made before Bloodsport turned him into an international star, he's one of the Russian baddies, a stone-faced enforcer who kicks, punches and performs his patented splits more often than he speaks. Practically shoehorned into the movie, his character is a constant presence but inconsequential to the actual plot. Van Damme's really only here to scowl and square-off against Kosugi a few times, but he's admittedly the best part of the movie.

The film itself is a by-the-numbers thriller with rote performances, a generic plot and low-wattage action. But if one's aware of this going in, Black Eagle isn't without some entertainment value, though sometimes at its own expense. It helps if you have an affinity for the plethora of budget-conscious action epics being cranked out in the 80s. A lot of 'em were unintentionally funny even then and this one's no exception, especially during scenes which take place on and under the sea, such as a toy boat being used to depict the destruction of a massive cargo ship.

It's really the perfect choice for another Blu-Ray release in MVD's wonderfully-kitschy "Rewind Collection" series. Like their recent release of the equally-dubious Attack of the Killer Tomatoes, MVD has pulled out all the stops to give Black Eagle a remastered Blu-Ray that's loaded with substantial new bonus material, including four lengthy featurettes and two versions of the film (theatrical & extended cut, running 10 minutes longer). Even the cover art and slipcase are affectionate throwbacks to the glory days of VHS, complete with tattered stickers politely reminding viewers to "Be Kind...Rewind." Whether or not you care for the movie itself, these extras are a lot of fun.