Blu-Ray Review: A TRIP TO THE MOON 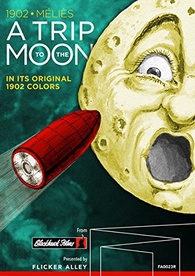 In nothing else, you aren't likely to find a more lovingly-assembled Blu-Ray release dedicated to a single 15 minute film.

Of course, this isn't just any 15 minute film. A Trip to the Moon is arguably the most important 15 minute film in history. Universally acknowledged as the very first science fiction movie (heavily inspired by Jules Verne), it was the brainchild Georges Melies. In addition to being a technical pioneer, he explored the narrative possibilities of film before it was even an industry.

More than just the film, this set is also a celebration of Melies himself. In fact, the uninitiated might want to check out the accompanying 65 minute documentary beforehand. The Extraordinary Voyage is a wonderful retrospective of Melies' groundbreaking achievements, featuring interviews and commentary by various filmmakers & historians, along with clips from many of the 500+ films he made during his relatively short career. The film also documents the painstaking efforts to restore a long-thought-lost colorized version of A Trip to the Moon - each frame was originally hand-painted! - to its former glory.

Watching the documentary first, one can't help but view A Trip to the Moon as much more than just whimsical entertainment (thought it's still quite charming). It's impossible not to appreciate the film's impact and influence on both audiences and filmmaking. This disc features both the restored color print, which looks remarkable, and the commonly-available (but more intact) black & white version. There are also several music options, including orchestral, improvised piano and a surprisingly effective synthesized score. Other audio options offer narration and/or actors voicing some of the characters.

This Blu-Ray edition of A Trip to the Moon from Flicker Alley is must-own for anyone who considers themself a cinephile. The film's lasting influence is immeasurable and the chance to finally experience it as audiences first did in 1902 is too good to pass up.

EXTRA KIBBLES
THE EXTRAORDINARY VOYAGE - A feature-length 2011 documentary about Melies' life and career, with a special emphasis on "A Trip to the Moon." One of the best film history docs I've ever seen.
"THE ECLIPSE" (1904) & "THE ASTRONOMER'S DREAM" (1898) - Two other Melies films.
SUPLEMENTARY BOOKLET - Contains screenshots, vintage photos and a detailed essay by Gilles Duval & Severine Wemaere, which is an excerpt from the book, A Trip to the Moon Back in Color.
DVD COPY
KITTY CONSENSUS: