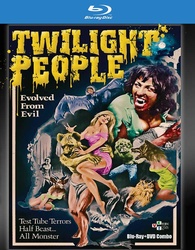 Though no acknowledgment or credit is given, Twilight People is a budget-conscious adaptation of H.G. Wells' The Island of Dr. Moreau. Of the most well-known films based on that classic novel, this one isn't nearly as handsomely produced as AIP's 1977 film, but still more goofball fun than the 1996 Brando debacle.

Matt Farrell (John Ashley) is a roguish adventurer who's kidnapped while scuba diving (!). He's taken to a remote island where demented genius Dr. Gordon (Charles Macauley) is conducting bizarre experiments, trying to combine humans and animals into some kind of super-being more adaptable to the changing world. Some of his subjects roam the island, others remain in cages (and they ain't too happy about it).

Assisting Dr. Gordon is his sexy daughter, Neva (Par Woodell), who's increasingly alarmed by her father's cruelty while becoming smitten with Farrell. Eventually, she and Farrell free the beasties and try to escape the island. The second half of the film is a chase through the jungle, with Gordon's arrogant, perpetually grinning henchman, Steinman (Jan Merlin), hunting them down.

Twilight People is not without plenty of issues. Bargain basement production values and silly make-up aside, the movie is atrociously edited and narratively lazy, such as a primary villain who simply disappears late in the story, never to return. However, its endearing tackiness keeps things entertaining. Though she's buried under fangs & prosthetics, a young Pam Grier somehow exudes more sex appeal (even while ripping out throats) than the film's bland leading lady. Similarly, Ashley is a deadly-dull hero, but Merlin looks like he's having a great time. Additionally, the wildly inappropriate jazzy music score is a real hoot.

Running only 81 minutes, Twilight People doesn't stick around long enough to wear out its welcome. In the interim, the movie is mildly amusing (intentionally or otherwise) and surprisingly bloody for a PG rated film. This Blu-Ray remaster is pretty decent, though apparently some of the original negative couldn't be completely cleaned up. There are several moments, especially during the first act, with distracting blemishes, spots and yellow streaks.