Blu-Ray Review: UP IN SMOKE 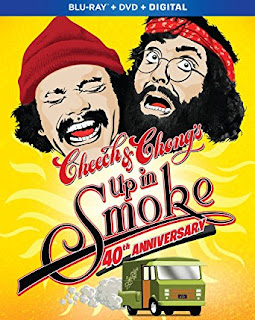 Back in the 70s, weed was still illegal, illicit and, most ominously, the gateway to a living hell of addiction, crime and debauchery. Only hippies, headbangers and Jane Fonda dared risk their souls by indulging in the devil's lettuce.

So the unexpected success of Up in Smoke was telling. Here was a rambling, low budget film starring a counter-culture comedy duo, directly aimed at a specific audience who were likely as high as the characters on-screen. That it immediately skipped-over cult status and became a box office smash suggests a lot of people could relate to Cheech & Chong's unique brand of drug-related humor. Considering the film was best enjoyed by those in a similarly altered state, perhaps marijuana use was more mainstream than some conservative alarmists wanted to admit.

40 years later, it's amusing to entertain the notion that Up in Smoke is damn-near a period piece. Not that it hasn't aged well. In fact, its humor holds up better than countless stoner comedies that followed in its wake (including Cheech & Chong's own subsequent films). Even today, Up in Smoke remains hugely influential. But the actual plot - yes, it sorta has one - is contingent on the drug's illegality and difficulty in acquiring, which make Pedro (Marin) and "Man" (Chong) such an amusing pair of antiheroes.

With recreational marijuana now legal in nine states, and more joining the list every voting year, it won't be too long before one of the most amiably-subversive films of the 70s is viewed in the same context as prohibition era gangster movies. As such, Up in Smoke is a wonderful nostalgia trip, though still best-viewed when totally high (which is much easier to do today than in 1978).

If nothing else, Cheech & Chong knew their audience and Up in Smoke remains the only unqualified classic in the stoner comedy genre. Everyone from Mike Judge to Snoop Dogg to Seth Rogan owes these guys a tip of the hat. Finally on Blu-Ray for the first time, this disc also includes a new interview with Marin, Chong & director/producer Lou Adler, who look back on the making of the film.

EXTRA KIBBLES
NEW: FEATURETTE: "How Pedro Met the Man: Up in Smoke at 40" - New interview with Marin, Chong & director Lou Adler
FEATURETTE: "Lighting it Up: A Look Back at Up in Smoke" - Vintage featurette from 2007.
"EARACHE MY EYE" - Animated video of one of their most famous sketches.
"THE MAN SONG" - A hyper-edited montage of every moment someone in the film says "man"
DELETED SCENES (including a scene with Harry Dean Stanton!)
AUDIO COMMENTARY - With Cheech Marin & Lou Adler
RADIO SPOTS
DVD & DIGITAL COPIES
KITTY CONSENSUS: 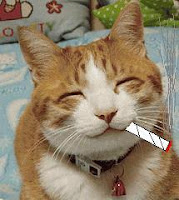