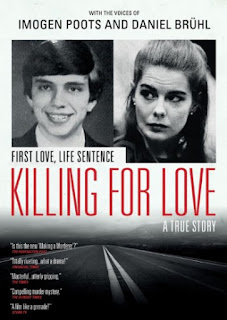 Jens Soring and Elizabeth Haysom are currently serving life sentences for the brutal murders of Haysom's parents. Tried and sentenced separately, their court appearances are somewhat noteworthy today as being the first which were publicly televised.

The story goes that Elizabeth hated her parents so much she wanted them dead. She meets Jens in college, who falls so head-over-heels in love with her that he's happy to oblige. Both of their stories change significantly before, during and after the trials. Speaking from prison 30 years later, Jens candidly claims he was simply a lovesick rube duped by Elizabeth into taking the fall, when if fact it was she and someone else who committed the murders.

Killing for Love is a documentary that looks back at this sensational case through old trial footage, interviews with people involved and written correspondence between Elizabeth & Jens (voiced by Imogen Poots & Daniel Bruhl). Though Elizabeth declined to be interviewed, Jens is more-than-willing. He doesn't paint himself as a saint, but still maintains his innocence.

Though both sides of the case are presented, the film leans toward the notion that Jens may have unwittingly been a patsy and Elizabeth herself committed the actual murders (perhaps you shoulda showed up to defend yourself, huh, lady?). Killing for Love is an interesting-if-overlong film that treads similar ground to various murder docs typically shown on cable TV, though hearing the tale from Jens himself (who does appear remorseful) raises this a bit above the usual academic account of horrific events. The admission that he threw away his entire life for a woman is the most compelling part of the film.

Whether or not we believe Jens, he makes Killing for Love is worth checking out, but probably only once. Though never lurid or sensationalistic, the film is sometimes pretty disturbing, and not just the frequent images of the crime scene (which are graphic). Bruhl’s readings of Jens’ letters are creepy as hell.