Blu-Ray Review: THE CITY OF THE DEAD (a.k.a. HORROR HOTEL) 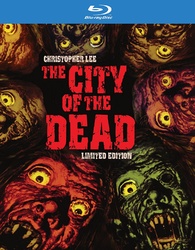 You know what's really weird? Hearing someone with a voice as distinctive as Christopher Lee speaking with an American accent.

Fortunately, he's more convincing as an American college professor in The City of the Dead than Dick Van Dike was as a cockney chimney-sweep Mary Poppins. Unfortunately, despite top billing, Lee is just a supporting character (albeit a pivotal one) in this Lovecraftian little piece of gothic horror.

In 1692, the witch-fearing villagers of Whitewood burn Elizabeth Selwyn (Patricia Jessel) at the stake. Centuries later, on the recommendation of her professor, Alan Driscoll (Lee), young college student Nan Barlow visits Whitewood to do research for a term paper. After she disappears, her brother and boyfriend follow her trail to Whitewood, only to discover a coven of witches led by Selwyn, who've made a satanic pact to regularly sacrifice virgins in exchange for eternal life.

Though quite revered in some circles, The City of the Dead is a slight but atmospheric film that isn't particularly memorable, save for one thing: Without going into specifics that would spoil the party, from a structural standpoint, the way the story unfolds is remarkably similar to Psycho. A mere coincidence, of course, being that both films were released around the same time.

While most of the performances and characters are merely perfunctory, Christopher Lee is his usual sinister self, even with an American accent. The City of the Dead is narratively unremarkable, though the (deliberate?) artificiality of the set design gives it a uniquely surreal quality. The film has been nicely restored for this Blu-Ray, which includes a few vintage bonus features from the original DVD release. Fans of the actor will especially enjoy the video interview, where Lee recalls his experiences working with a variety of legendary directors.