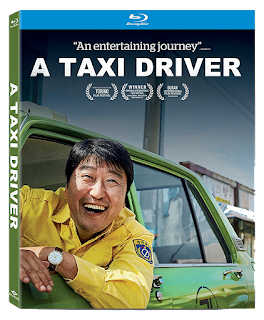 Poor Kim. All he wants to do is score a big cab fare to pay his rent and provide for his daughter, only to end up the unsung hero of a freedom movement. Claiming to be based on true events, I don't know how much of what happens in A Taxi Driver is accurate, but it makes a hell of a movie.

The film takes place in 1980 South Korea, which has recently fallen under military dictatorship. Seoul taxi driver Kim Man-seob (Song Kang-ho, who's terrific) is a widow who has more immediate financial concerns than government turmoil. When he overhears that photojournalist Jurgen Hinzpeter (Thomas Kretschmann) wants to travel to Gwangju to document student protests (and is willing to pay 100, 000 Won), Kim immediately jumps at the opportunity to drive him.

What the two discover, however, is Gwangju is under martial law and extremely dangerous, especially to foreigners. Protesters are being shot in the streets by the military, which is completely contrary to what everyone outside Gwangju is being told in the news. Worse yet, plainclothes security officers are on the lookout for reporters who could expose what's going on, meaning Kim and Jurgen end up being hunted. This doesn't sit well with Kim, of course, who just wants to collect his fare without getting involved. However, when his car breaks down and a curfew leaves him trapped, he and Jurgen learn from other cabbies (and their families) just bad things have gotten. And this is before the ongoing conflict escalates into a full blown massacre.

In real life, Jurgen Hinzpeter did indeed use his camera to show the world what was actually happening in Gwangju, getting in and out of the city with the help of a heroic cabbie. But aside from Hinzpeter's gratitude for the driver's heroism, little else was known about him. This gives A Taxi Driver the creative freedom to use the Gwangju Massacre as the backdrop for an emotionally powerful character transformation. The film is accurately titled. Kim is just another anonymous, passive working man (nearly a bumbling fool) until circumstances force him to reassess not only what's happening around him, but his own personal values.

Despite the dark historical context (not to mention the decidedly misleading Blu-Ray cover art), A Taxi Driver turns out to be unexpectedly thrilling, suspenseful and ultimately poignant, boosted considerably by a cast of extremely likable protagonists whose actions under dire circumstances (to say the least) make the film an emotionally rousing experience worth seeing more than once. If you aren't moved by the final act, you must not have been paying attention during the previous 90 minutes.

MEE-OW! LIKE BEING TURNED LOOSE IN A BIRD SANCTUARY
Posted by D.M. Anderson at 1:18 PM