THE INSULT (L'insulte): How to Use Words as Weapons 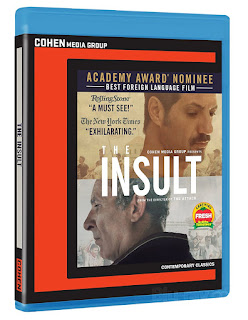 As The Insult so effectively demonstrates, sometimes it doesn't take much for things to spin wildly out of control.

Lebanese auto mechanic Tony Hanna (Adel Karam) and his pregnant wife have a small apartment in a run-down section of Beirut. The neighborhood is undergoing renovation supervised by Yasser Salameh (Kamel El Basha), a Palestinian refugee. When Yassir informs Tony that his balcony drain pipe needs to be repaired, Tony refuses to let him near it. Out of courtesy, Yassir fixes it, anyway, only for Tony to angrily - and inexplicably - smash it to pieces. Yassir calls him a "fucking prick," which infuriates both Tony and Yassir's boss, who insists Yassir visit Tony at his garage and apologize.

Though Yassir does indeed show up, he finds it difficult to swallow his pride and say anything, which is understandable, since Tony has been a complete asshole about the whole incident. Assuming no apology is coming, Tony goes on a verbal tirade about his hatred of Palestinians, capping it off with, "I wish Ariel Sharon had wiped you all out." The viewer eventually learns just how incendiary that statement is, but we still get the gist that it's a pretty terrible thing for a Lebanese Christian to say to a Palestinian. In the meantime, Yassir punches Tony, breaking a few ribs.

Thus begins a conflict that escalates into a contentious court battle, with Tony suing Yassir, not only for physical damages, but for the incident being a roundabout cause of his wife's miscarriage. The case is exacerbated by the men's lawyers, who publicly politicize the incident. Tony's lawyer, in particular, seems to have an agenda beyond simple justice for his client. As the trial becomes a media circus, the community is divided as old wounds - stemming from an old wartime conflict between Lebanese Christians and Palestinians - are re-opened. It's at this point we learn much more about the pasts of both men. While we don't necessarily condone their headstrong behavior - especially Tony's - at least we begin to understand it. Furthermore, neither man intended things to get this out-of-hand.

Not only is The Insult a compelling courtroom drama, it's a thought-provoking study of how extensively past experiences shape one's personal values and prejudices. Not only can it cloud your judgment, it threatens to destroy any empathy for those whose views differ from yours. That's about as timely as movies get right now. I can personally think of a lot of people who'd benefit from witnessing the epiphanies of these characters.

The Insult is also the first Lebanese film ever to earn an Oscar nomination (in this writer's opinion, it should have won). In addition to its thematic relevance, the movie's massively entertaining, with outstanding performances. Karam, in particular, stands out among the great cast, doing a masterful job of making us empathize with someone we initially despise. The Insult is an all-around terrific film, not to be missed.

EXTRA KIBBLES
"CONVERSATIONS FROM THE QUAD" - A conversation with Ziad Doueiri and Richard Pena.
KITTY CONSENSUS:

MEE-OW! LIKE TAUNTING A MOUSE TO DEATH
Posted by D.M. Anderson at 8:43 PM