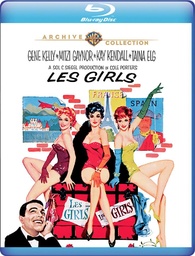 Les Girls is notable for being Gene Kelly's last MGM musical. While it pales in comparison to his crowning achievements with the studio (Singin' in the Rain and An American in Paris), the movie is not without charms of its own.

Sybil Wren (Kay Kendall) has just published a tell-all book about her time with Les Girls, a dance group led by Barry Nichols (Kelly),  which also includes Joy Henderson (Mitzi Gaynor) and Angele Ducros (Taina Elg). As the film opens, Angele is suing Sybil for libel, claiming that events in the book are complete lies, particularly the chapter which says Angele attempted suicide after having her heart broken. Taking the stand in her defense, Sybil recounts the incident, in which Angele falls in love with Barry while engaged to her fiancee, Pierre, who isn't even aware she's a dancer.

The next day, Angele tells her version, which has Sybil turning into a drunken lush because she's the one in love with Barry...or at-least that's what they tell Barry to keep him from dropping her from the show. It turns out Sybil has a fiancee, too, who obviously isn't happy with her or Barry. Finally, Barry himself takes the stand with what he says actually happened, which mostly involves circumstances surrounding his pursuit of Joy.

This is merely a wrap-around story to showcase Kelly doing what he does best: performing elaborate song-and-dance numbers with one or more of his co-stars, the best one being Kelly and Gaynor in an amusing send-up of The Wild One. But Les Girls isn't quite a full-blown musical in the traditional sense. Rarely does a character actually break into song during the story itself. A majority of the Cole Porter numbers featured are performed onstage before an audience. It doesn't make them any less entertaining, though, especially for Gene Kelly fans.

Despite the suicide angle, the tone of Les Girls is congenial and laid-back, happy to bounce from one predicament to the next with some snappy singing and dancing along the way. There's little substance beneath the shiny surface, but who wants that in a musical?

EXTRA KIBBLES
FEATURETTE: "Cole Porter in Hollywood: Ca C'est L'Amour" - Hosted by co-star Taina Elg, this is just as much about the cast and production of Les Girls as it is about Porter.
CARTOON SHORT: Tex Avery's "The Flea Circus"
TRAILER
KITTY CONSENSUS: