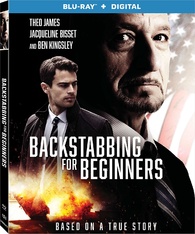 Of course, it's always enjoyable to watch Ben Kingsley at work. His dedication makes even the worst movies at-least endurable. And let's face it...Sir Kingsley has frequently lent his respected name to some real dumpster fires, especially during the last decade, sort-of making him the Michael Caine of the 21st Century.

Fortunately, Backstabbing for Beginners isn't a dumpster fire, though Kingsley is easily the main reason to check it out. Well, him and Jacqueline Bisset, who doesn't grace us with her presence as often as she used to, at least in anything worth watching (9/11? Really Jackie??). Unfortunately, neither are in the film nearly enough (especially Bisset), taking a backseat to Theo James as Michael, an ambitious, idealistic newbie working under the tutelage of UN diplomat Pasha (Kingsley).

Backstabbing for Beginners is based on a true story, adapted from the book by Michael Soussan, who uncovered massive corruption while assisting his mentor in Iraq during the United Nation's Oil-for-Food Program. Prior to the invasion of Iraq, the program made it possible for Iraq to sell their oil in exchange for food and other essentials. However, self-serving diplomats, leaders, private companies and a variety of other morally-questionable folks benefited more than the Iraqi people actually did.

Structurally similar to Oliver Stone's Wall Street, the story is mostly focused on Michael's eventual disillusionment over the graft and corruption he witnesses. Before he even starts his job in earnest, he's essentially forced by the CIA to report everything he sees, including Pasha's actions, meaning rampant corruption has been going on for quite awhile.

Some of this is pretty interesting, especially if one was completely unaware of the Oil-for-Food scandal (like yours truly). As political thrillers go, though, its not always terribly gripping. Kingsley is terrific, as usual, creating a compelling character who's as cynical as he is foul-mouthed...and not necessarily a villain in the traditional sense. We often get the impression that, despite his less-than-savory dealings, Pasha is doing to best job possible with what - and who - he has to work with. It makes one wish the film were focused mainly on him because Michael is simply not as interesting, even after hitting the sheets with Nashim (Belcim Bilgin), a Kerdish rebel with an agenda of her own (she's more interesting than Michael, too).

Still, this is a true story that needed to be told and Backstabbing for Beginners does it fairly well. We learn a lot about what happened, who was involved and the eventual consequences. The film could've benefited from a bit more dramatic punch, though.

EXTRA KIBBLES
FEATURETTE: "The Truth Behind Backstabbing for Beginners"