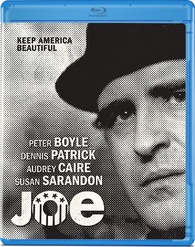 Available on Blu-Ray from
OLIVE FILMS

Have you ever heard about an atrocity committed by two or more people who share such a hateful, twisted mindset - the kind of stuff no right-thinking person voices out loud - that you wonder just how in the hell they managed to find each other in the first place? Well, Joe shows us how...and no internet required!

The 60s are over, and with it, the romanticized luster of the counter-culture movement. The film's titular character (Peter Boyle) is an angry, racist, hippie-hating factory worker who sometimes talks about killing one. Then he meets Bill...

After his daughter, Melissa (a young Susan Sarandon), nearly dies from an overdose, ad-exec Bill Compton (Dennis Patrick) goes to her apartment to retrieve her belongings. When her drug-dealing boyfriend, Frank, shows up unexpectedly, Bill kills him in a fit of rage. Scared, he goes to a nearly bar, where Joe's drunkenly ranting about drug-dealing hippies. Bill reveals he just killed one, but Joe initially thinks he's just joking. When he later learns otherwise, Joe contacts Bill, not to blackmail him, but to learn more about the man he believes is a kindred spirit.

Thus begins the unnerving friendship in Joe, an early film by director John G. Avildson, who'd ironically gain later fame for feel-good, triumph-of-the-underdog movies. It's hard to decide what's more disturbing, that Joe is so gung-ho over Bill's actions, or Bill's realization that he enjoyed killing Frank. Joe is angry (and full of shit) from the get-go, but what are we to make of Bill? Initially the polar opposite of Joe, he isn't what you'd call likable, but we empathize with him at first. But as the bond between these two grows stronger - with Bill declaring Joe a "breath of fresh air" compared to his normal social circle - we begin to question their agenda, especially during a telling scene that establishes them as pure hypocrites, where they smoke dope and participate in an orgy with some of the very hippies they profess to hate. 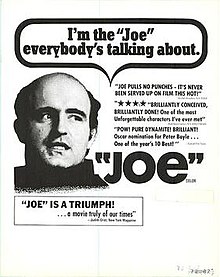 It helps if one keeps in-mind the era during which Joe was released, since the hippie-dippy aesthetic is pretty off-putting and the first 15 minutes are spent watching young adults shooting up and popping pills. But a funny thing happens once Bill meets Joe: We're ominously reminded that, in this era of social media and fear-mongering government leaders - it's even easier for the Joes of the world to fly their hate flag for like-minded monsters to salute.

In that respect, Joe might be more timely than ever. For a film with a main character we neither like or respect, it remains morbidly fascinating after all these years (since most of us probably know someone just like him) and comes to an ironic climax you aren't likely to forget.