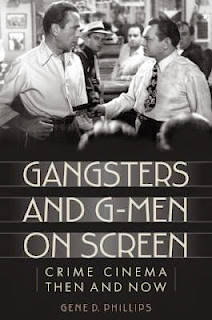 What self-respecting movie fan doesn’t love a good gangster movie? Compared to our own mundane 9-5 existence, gangster life is as far-removed from our personal experience as a superhero movie. Even though the best films are somewhat grounded in reality, it remains an alien world, and probably the reason the genre continues to have such mass appeal. These films allow us to identify with characters we would never associate with in real life.

That’s what made early classics such as Little Caesar and the original Scarface connect with audiences, even though their protagonists are essentially awful people. Gangster films touch our dark side.

Of course, there have been scores of books dedicated to the genre, but perhaps none as unigue as Gangsters and G-Men On Screen. This book, written by Gene D. Phillips, is not intended as a comprehensive overview of the genre. In fact, many of the most historically-beloved gangster epics released over the years are scarcely given a mention (such as Goodfellas, The Godfather and 1982's Scarface). Instead, Phillips provides a lot of insight on some of the lesser-known (but no-less groundbreaking) films of the early days, along with selected recent movies which influenced the genre in the post-Godfather era (such as an entire chapter dedicated to The Godfather Part II, which steered the saga in the direction of Shakespearian tragedy).

One could carp that Phillips barely acknowledges many latter-day films which had a huge impact on modern pop culture. Yet at the same time, do we really need yet-another in-depth examination of the original Godfather (especially since Part II is arguably more ambitious and complex)? Isn’t it more interesting to read about the films which made Goodfellas possible in the first place?

As a movie guide, Gangsters and G-Men on Screen will disappoint many readers who are looking for confirmation of the greatness of their favorite gangster films. But for anyone who’s ever wondered what truly makes the genre transcend generations, this book is a good read.