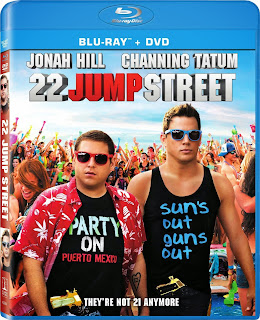 I think it’s safe to say just about everyone was surprised 21 Jump Street (based on a TV show most-remembered for making Johnny Depp a teen idol) turned out as good as it did. What could have been just another cynical attempt to cash-in on a nostalgic brand name was instead re-imagined as a big, brash action comedy, loaded with raunchy one-liners, over-the-top sight gags and unexpectedly engaging performances by Jonah Hill and Channing Tatum. Since it was a huge hit, I doubt anyone was surprised when the inevitable sequel was announced.

The problem with comedy sequels is that, more often than not, the initial premise is really only fresh the first time, and movie history is rife with completely unnecessary follow-ups which are little-more than stale remakes of the original (The Hangover II, Grown-Ups 2, etc). But even though 22 Jump Street is essentially more-of-the-same, perhaps part of the reason the formula still works is due to the episodic nature of the series it’s based on. In other words, if you enjoyed the original, there’s no reason you won’t like this one too.

This time, Schmidt (Jonah Hill) & Jenko (Channing Tatum) go undercover as college students to investigate who’s behind the distribution of a new synthetic drug (WHYPHY). But like the first film, the story is just a clothesline on which to hang lots of jokes and gags. Schmidt & Jenko are just as inept as ever, and much of the humor comes from them trying to fit-in even though they are noticeably older than the other students. This time around, however, it’s Jenko who manages to get caught up in the campus life, falling in with a bunch of hard-partying frat boys and becoming a star on the football team. Meanwhile, Schmidt begins dating Maya (Amber Stevens), but it isn’t until later (in one of the more amusing scenes) that it’s revealed this relationship becomes complicated in a way which wouldn’t be fair to give away here.

While the plot itself provides a few interesting twists, much of what makes 22 Jump Street amusing is the interaction between Hill and Tatum. They are often hilariously presented more like a troubled couple in need of counseling (which they actually get) than partners in an ongoing investigation.

Like a lot of low-brow comedies, not all the gags work (some go on far longer than they need to), and a few scenes appear to serve no purpose other than to provide gratuitous cameos (there are several throughout the movie). Still, 22 Jump Street is amusing enough to justify its existence. Not much has changed since the first film, but it’s still pretty damned funny. The best gag of all shows-up during the end-credits sequence, with a hilarious jab at Hollywood’s tendency to take a successful franchise and run it into the ground. With a third Jump Street film already in the works, lets hope that isn’t a self-fulfilling prophecy.