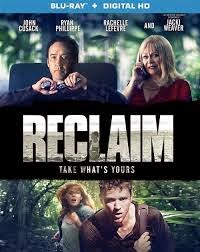 Reclaim falls into that netherworld where movies often go to die…it’s not quite straight-to-DVD fodder, yet nothing the average viewer would ever feel compelled to see on the big screen. It initially received the same simultaneous on-demand/limited theatrical release as most movies which aren’t likely to generate high expectations.

And indeed, despite its sensational subject matter, Reclaim is nothing special…a fairly predictable, low-rent thriller boasted somewhat by a fun performance by John Cusack in a rare villainous role, as well as some impressive cinematography. Still, if you keep your expectations in check, the movie is a reasonably entertaining way to kill 90 minutes.

Ryan Phillippe and Rachelle Lefevre are Steven & Shannon, a dull couple duped into adopting a Haitian girl, Nina (Briana Roy), by an agency which cons as much cash from prospective parents as possible before disappearing. Since they’ve grown attached to Nina - and the local government is pretty useless - this couple tries to find the girl on their own. Cusack is a sleazy opportunist who helps the agency suck parents into this ruse by absconding with the kid. He also wants to bilk Steven & Shannon of even more money, kidnapping them in hopes on draining their bank account. But he doesn’t count on their determination and resiliency to get their child back.

Like so many films before it, Reclaim largely depends on the idiocy of its characters to move the plot along. Nobody comes across as very smart. The great character actor, Luis Guzman, is especially wasted in his role as a totally worthless cop. Phillippe & Fefevre do their best, but neither have the acting chops to make us feel the desperation of their characters’ feelings of violation and loss. As for Cusack...he is obviously slumming here, but at least he brings his A-game.

Still, despite its occasionally-ridiculous plot turns and stupid characters, Reclaim remains oddly watchable, mainly because we do feel a sense of urgency in Steven & Shannon’s attempts to get their child back. Sure, we’re never less-than-convinced everything will turn out hunky-dory, but like those shamelessly manipulative movies on Lifetime and the Hallmark Channel, Reclaim compels us to see the story through to the end.