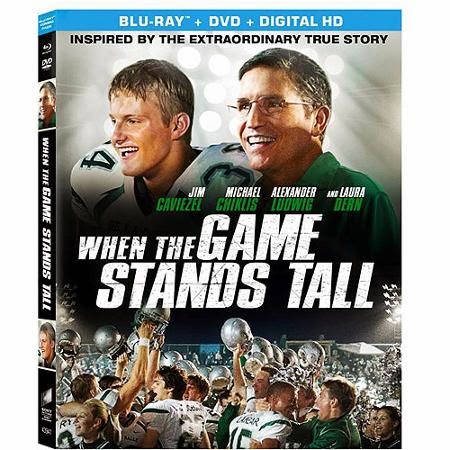 While we’re used to sports movies where an underdog emerges triumphant against all odds, When the Game Stands Tall gives us a team who aren’t used to losing. In fact, the De La Salle High School Spartans haven’t lost a game in 12 years.

Then three events occur which have a devastating effect on the team and community. Coach Bob Ladouceur (Jim Caviezel) suffers a heart attack, and their star senior, just offered a full ride to play for the Oregon Ducks, is killed in a drive-by shooting. Worst of all, the Spartans' 151 game winning streak is broken. These first 30 minutes make it pretty obvious where the next 90 are heading.

Ladouceur, who’s turned down lucrative offers to coach at colleges, has always believed football is more about brotherhood, trustworthiness and character building than winning football games, a philosophy he tries to instill in his latest batch of players (including his son). One major subplot involves running back Chris Ryan (Alexander Lidwig), pressured by his overbearing father (Clancy Brown) to break the season touchdown record, the antithesis of everything Ladouceur stands for. You’ll be able to guess the outcome of this conflict long before it plays out, but there’s comfort in predictability when it comes to inspirational sports movies, especially those based on true stories (which is just about all of them).

Storywise, When the Game Stands All is a bit meandering. The shooting of T.K. (Stephan James) is indeed tragic, but from a narrative standpoint, his death has little impact on the plot. In fact, he’s largely forgotten until the climactic game when a banner is raised in his honor. Additionally, the strained relationship between Ladouceur and his son doesn’t really resonate because the kid is a self-centered jerk (berating Dad for having the nerve to suffer a massive heart attack just before football season).

Speaking of which, there’s a surprising lack of characters we actually empathize with. Ladouceur is certainly likable (and solidly played by Caviezel), but more of a symbol of righteousness than a fallible human being. The opposite can be said for Mickey Ryan, the abusive dad. Clancy Brown is well-cast because all he’s required to do is be blatantly hateful (which he’s good at), but few fathers (even in sports films) are this one-dimensional. Laura Dern is wasted as Bob’s wife, doing little-more than applauding the awesomeness of her husband. And I would have appreciated seeing more of Michael Chiklis as the assistant coach; he’s terrific, but aside from a few inspirational speeches, is criminally underused.

Still, there are some rousing moments in the film, particularly in the final act, when the team finally learns to selflessly depend on each other both on and off the field. The game scenes are suitably exciting, and each major character on the team gets their individual moment of glory, including Bob’s jackass son. I suppose, since overcoming your first high school defeat in 12 years is decidedly a first-world problem, it’s a credit to director Thomas Carter that his dramatic flourishes make the situation seem more life-and-death than it probably warrants.