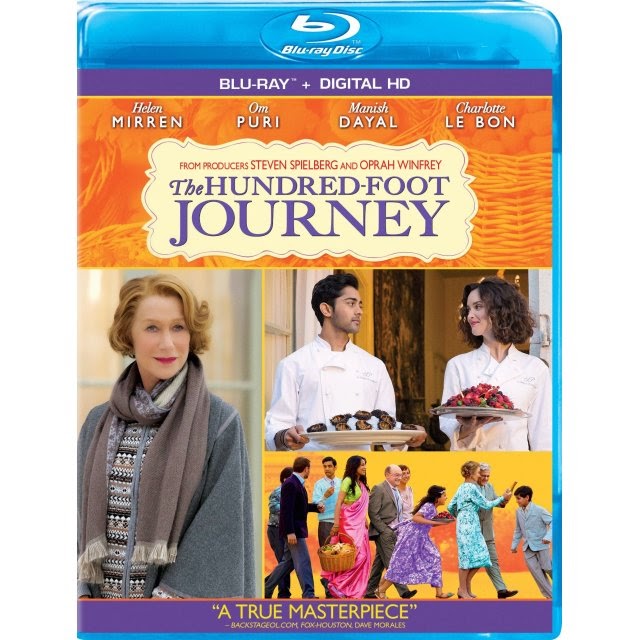 In the right hands, it's amazing how cinematic something as seemingly mundane as cooking can be, and we’ve gotten two such movies this year. Jon Favreau’s Chef was a surprising - and welcome - return to his indie roots. The Hundred-Foot Journey is a bit more ambitious, but what both pictures do very well is present flawed-yet-likeable characters, a supreme knowledge of the restaurant business and, at least while we’re watching, stories which seem deceptively simple, when in reality there’s a great deal going on. And yeah, you’ll likely be hungry as hell afterwards. These two films would make a great snuggle-on-the-couch double feature with your significant other.

In The Hundred-Foot Journey, Papa Kadam (Om Puri) is the patriarch of an Indian family forced to abandon their restaurant after it is firebombed due to political unrest. After a brief period wandering Europe, they end up in a French village when their van breaks down. Impressed by the amount of fresh food available at the local markets, Papa decides to buy an abandoned old restaurant right across the street from Le Saule Pleureur, a prestigious French eatery run by Madame Mallory (Helen Mirren), a snobbish widow who doesn’t like their presence one bit. She attempts to sabotage their Kadam’s efforts to get their restaurant off the ground, which becomes complicated, not only by Papa’s tenacity (he’s as stubborn as she is), but by her sous chef, Marguerite, who’s taken a liking to Hassan (Manish Dayal), one of the Kadam boys being groomed to take his mother’s place as their head chef. However, Hassan himself is ambitious beyond the family business, which Mallory recognizes when he demonstrates the capability of being a world class chef.

But that’s just the story on the surface. Ultimately, The Hundred-Foot Journey is about tearing down prejudicial walls, acceptance, empathy and, of course, love. Mallory may come across as a cold-hearted bitch when we first meet her (seeing the Kadams as classless), but her epiphany after an act of vandalism on the Kadam’s place renders her a wonderfully-dynamic character (and Mirren plays her perfectly as usual). The same goes for Papa, who’s initially just as pig-headed and set in his ways. The evolving relationship between these two is easily the crux of the movie, providing a majority of the humor and audience-rousing moments. The interaction between Mirren & Puri is about as charming and entertaining as movies get without explosions.

The subplot of Hassan’s quest to be a renowned chef, and how it affects his relationship with Marguerite, is a bit more predictable and not quite as compelling. Still, these two are essential to the overall story, especially during the closing scenes.

I suppose The Hundred-Foot Journey is just a tad ‘artier’ than Chef, but that shouldn’t disuade anyone from checking it out. It’s a film stuffed with great characters we care about and a theme most of us could benefit from seeing more often. Most importantly, this movie is a lot of fun.