The Sneakiness of GASLIGHT 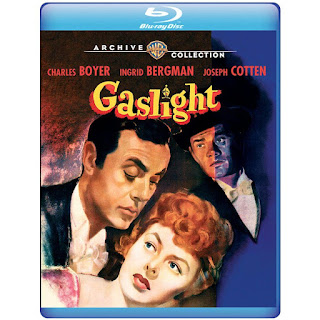 Gaslight is one of the great thrillers of the 1940s, though I wasn’t necessarily thinking that while watching. It was nominated for 7 Oscars, but I'm ashamed to say I’ve never seen the film until now. Even worse, this is the first time I’ve ever watched the great Charles Boyer. And I have the gall to call myself a cinephile.

Anyway, Gaslight initially unfolds as a mystery with the murder of famous singer Alice Anton at the hands of a man looking for her precious jewel collection, which he didn’t find because her young niece, Paula, suddenly showed up. Okay, so far so good. I enjoy a good mystery now and then.

Fast forward several years and Paula (Ingrid Bergman) is all grown up. She inherited the old home where Alice died, but remains haunted by memories of the murder, so she has since moved away. However, in a whirlwind romance, she meets and marries pianist Gregory Anton (Charles Boyer), who convinces her they should return to London and live in the house. To ensure Paula’s not constantly reminded of her aunt, Gregory stows all of Alice’s belongs in the attic and boards up the door. So I guess the film ain’t a mystery, but still, so far so good. Despite appearing to be simply protective of Paula, there’s something intriguingly 'off' about Gregory that we don’t quite trust. Boyer is also sort-of interesting in the role.

As the narrative unfolds, Gregory’s protectiveness takes a dark turn. Not only does he constantly try to keep Paula housebound, he ventures out every single night, supposedly to where he can work without disruption. In the meantime, Paula is unnerved by flickering gaslights and strange noises in the house whenever she’s alone. Not only that, various items go missing and Gregory soon suggests she’s unconsciously stealing them. He becomes increasingly cruel and accusatory, trying to convince her she is losing her mind. By the time Inspector Cameron (Joseph Cotten) suspects a nefarious agenda, it’s obvious Gregory killed Alice and has a cold-blooded plan to get rid of Paula. Gaslight snuck up on me, being a crackling psychological thriller the entire time with one hateful son-of-a-bitch as its antagonist, played to icy perfection by Boyer.

As the film faded out, the first thing that popped into my head was, Wow, that was a damn good movie. It’s one of those sneaky films with no scenes that reach out and grab you, but by the final act, you’re on the edge of your seat anyway. This disc also includes the 1940 British version, but even though it came first, the 1944 MGM film is so suspenseful, well-written and perfectly-performed that it pales in comparison.

Gaslight is a great noir-tinged thriller that ranks among the best of the genre. New to Blu-ray, the transfer is terrific and the inclusion of the British version makes this release a must-own for classic movie lovers. Now that I’ve seen this one, I guess I can hang onto my cinephile card a little longer.

MEE-OW! LIKE TAUNTING A MOUSE TO DEATH.
Posted by D.M. Anderson at 2:59 PM