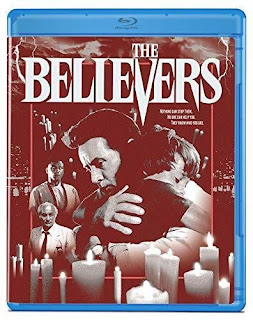 If nothing else, The Believers made me mindful of where I step.

In the very first scene, Cal Jamison’s wife is electrocuted in the kitchen, having the misfortune of standing barefoot in spilled milk when their coffee maker suddenly goes on the fritz. Cal (Martin Sheen) and their young son, Chris (Harley Cross), helplessly scream as she quivers and cooks to death. Lesson learned, whenever I shuffle barefoot & blurry-eyed into the kitchen each morning, I still have the foresight to make sure the floor's good 'n' dry when making my own coffee.

That disturbing scene is mostly inconsequential to the actual story, but sets a dark tone for the rest of the film, which has police psychologist Cal Jamison assisting New York detective Sean McTaggert (Robert Loggia) investigate a series of ritualistic child murders. Initially, all fingers point to Lopez (Jimmy Smits), another cop who’s delirious and claims a demon-worshiping cult is behind it all. He’s telling the truth, of course, but this cult also consists of wealthy white folks who commit sacrifices at the behest of its evil-eyed priest (Malick Bowens) in exchange for affluence and power.

I seem to recall The Believers being a popular video rental back in the day. It’s since-been mostly forgotten, probably because neither the narrative nor the characters are particularly memorable. But while the film isn’t all that scary either, it does contain some impressively-unnerving scenes that horror fans loved back then, including a gruesome sequence that reveals what’s lurking beneath one victim’s festering facial wound. These scenes alone probably make The Believers worth checking out for thrill-seekers – maybe even more than once – but the interim moments in between are far less interesting.

The Believers is a film where the whole doesn’t equal the sum of its parts. It’s watchable and the performances are decent (especially Smits & Loggia), but beyond its more sensational elements, the film doesn’t resonate too much afterwards. However, it might be of extra nostalgic interest for those whose weekends once consisted of weekend trips to their local video store (the nastier scenes still hold up pretty well). And who knows...perhaps it'll prevent you from being careless in the kitchen.