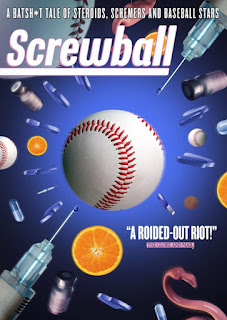 In the grand scheme of things, the doping scandal that brought down Alex Rodriguez and several other players had little impact on most of our lives (save for a few interesting weekends on SportsCenter). So as someone who couldn’t care less about baseball and didn’t really follow the story as it unfolded, I appreciated the snarky, comedic approach Screwball takes while still presenting all the facts and everyone involved.

And it’s a sure bet ol’ A-Rod doesn’t have this film in his collection.

Though technically a documentary, Screwball is structured almost like Goodfellas. Numerous shady figures are part of the story (including some with possible links to organized crime), but the three principle players are Tony Bosch, a so-called “doctor” who lived large and made a fortune providing PEDs to various athletes, Porter Fischer, a comically meat-headed rube who eventually blew the whistle on Bosch’s entire enterprise, and as the most prominent athlete nailed in the scandal, Rodriguez himself. Bosch and Fischer narrate most of the story, while A-Rod has understandably chosen not to participate. He is still prominently featured through archival footage from various news programs and interviews. That, along with comments from Bosch, paints him as an eccentric, narcissistic jackass.

But ultimately, no one involved is portrayed all that positively, including the MLB itself. Despite going to great lengths to justify their roles, Bosch still comes across as a sleazeball, Fischer, a dim bulb. Director Billy Corben is more concerned about creating an entertaining film than letting anyone off the hook, and does so brilliantly. Not only is the film fascinating, it’s often hilarious, particularly the dramatic re-enactments in which everyone is portrayed by child actors, looking and dressing like their adult counterparts. I’m not sure what purpose it ultimately serves, but it’s a wonderfully creative touch.

Best of all, the viewer doesn’t have to know a single thing about baseball or the PED scandal to enjoy it. Screwball is a quick-paced documentary with a narrative as compelling as a fictional crime film. And it isn’t one director’s subjective take on the story; the facts presented are indisputable. That it’s also surprisingly funny is simply the icing on the cake. A rare documentary worth multiple viewings, this one is highly recommended.