Before The Matrix, There was MINDWARP and BRAINSCAN 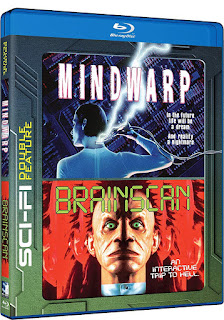 Both of these titles have been previously released on Blu-ray by other companies, quite recently, in fact. While each is sort-of watchable for different reasons, neither is worth the asking price (38 bucks on Amazon for Mindwarp? Really?). But as a bargain-bin double feature, why not?

It’s fitting that these two would be paired up. Conceptually, both are crude early examples of the ramifications of virtual reality; both lean more towards horror than pure sci-fi; both are undone by twist endings that were old-hat shortly after The Wizard of Oz was released.

In the low-budget Mindwarp, the world is a radioactive wasteland. Most  survivors live underground, plugged into machines that simulate any idyllic life they can imagine. As punishment for infiltrating the minds of others, Judy is exiled to the surface, where she meets Stover (Bruce Campbell, doing the whole Mad Max thing). Soon after, they are captured by a tribe of mutant cannibals led by an evangelical madman (Angus Scrimm).

Though its concept pre-dates The Matrix by eight years, Mindwarp will be of primary interest to gorehounds and Campbell fans. There’s certainly plenty of bloody carnage (some of it actually convincing), but Campbell is wasted in a role that requires him to play it straight. Aside from a subtle, unspoken reference to Evil Dead II, the entire film is too serious for its own good. On the other hand, it’s always nice to see Scrimm outside of the Phantasm franchise.

Brainscan features Edward Furlong - during his brief heartthrob heyday following Terminator 2 – as Michael Bower, a teenage misfit who finds respite through computer games. But he gets more than he bargained for with Brainscan, a VR game where he’s egged-on to commit murders by its host, Trickster (T. Ryder Smith). In a twist that will surprise absolutely no one, the murders turn out to be real and Michael is the unwitting killer.

It’s predictable to a fault and Trickster is an obvious attempt to create a horror icon akin to Freddy Kruger. Still, Brainscan manages to be fairly engaging. Smith has some funny, scenery-chewing moments. Furlong is yet-another troubled teen, but at-least he’s convincing in the role. While the special effects are terribly archaic, the film has a killer soundtrack featuring songs from numerous hard rock artists.

No bonus features are included on the disc, nor is the video or audio quality anything to write home about. Just two 90s’ relics offered at a cheap price. Neither are classics – or even cult classics – but budget-conscious horror fans could do a lot worse.