THE RUNNING MAN (1963): A Heaping Helping of Harvey 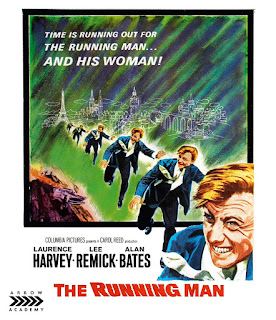 
Granted, I haven’t seen a lot of movies featuring Laurence Harvey. The Manchurian Candidate stands-out, of course, as well as a particularly nasty Night Gallery episode that gave me a few sleepless nights as a kid (when I was convinced earwigs were waiting until I was asleep to lay eggs in my brain). But whether he was a double agent, defending the Alamo or walking on the wild side with Jane Fonda, I never had the impression he was all that versatile.

That’s not to say he wasn’t interesting. In every movie I’ve ever seen him in, Harvey had a cold, arrogant demeanor that was quite fascinating (and reminds me a lot of my cats). Maybe that’s why he was so effective at playing unpleasant people, even if they weren’t always the antagonist. He might even be considered the antithesis of Jimmy Stewart.

Harvey is the best part of The Running Man, a 1963 British thriller which makes the most of his uncanny ability to play conniving bastards. He plays Rex Black, a charter pilot who – with wife Stella (Lee Remick) - fakes his own death to cash-in on his insurance policy so the two of them can live abroad. It’s interesting to point out that his character is initially a pretty decent guy. It’s only after being screwed over by his insurance company that he concocts this plan.

After briefly being questioned by insurance investigator Stephen Maddox (Alan Bates), Stella meets-up with Rex in Spain, where he’s changed his appearance and stolen a passport to assume the identity of Jim Jerome, a wealthy sheep farmer. He’s also been partying with new friends under this pseudonym, which concerns Stella, but since they must wait in the country a week for the local bank to process the insurance money, she plays along, pretending to be an old friend. Then Maddox shows up, surprising Stella. He says he’s on vacation, but it seems like too much of a coincidence for Rex’s liking, who insists they befriend Maddox to find out how much he actually knows.

Much of the narrative has the Blacks keeping up their ruse while learning more about Maddox, who comes across as introverted and lonely. Rex, however, grows increasingly cocky and impressed with his own cleverness. Stella becomes alarmed at the difference in personality between her husband and “Jerome.” Eventually, Rex thinks they might need to kill Maddox before he exposes them. Or is he just being overly paranoid? Maybe Maddox really is on vacation.

Part of the fun of The Running Man is how this quandary plays out. Though directed by Carol Reed, it often has the look and feel of lower-tier Hitchcock. I think ol’ Hitch would have injected some much-needed black humor into the story, which is somewhat meandering during the middle act. As for the performances, the film really crackles whenever Harvey is on-screen, less interesting when focused on the relationship between Stella and Maddox. Bates is fine, but I’ve never found Remick particularly compelling. However, the film does serve-up a nifty climax and cleverly ironic resolution.

Ultimately, though, this is the Laurence Harvey Show. His performance ain’t exactly a stretch, but it’s fun watching his character evolve into another despicable cad. No one did it better back then. Now on Blu-ray for the first time, Arrow Films has put together another quality release of a relatively obscure film. In addition to a fine transfer, one bonus feature suggests Mr. Harvey's persona may not have always been just an act.

EXTRA KIBBLES
"ON THE TRAIL OF THE RUNNING MAN” - A crew surviving crew members share their memories of the production. It is pretty interesting since the interviews are pretty candid (not everyone was overly impressed with the film). We also get the impression Laurence Harvey was a pill to work with.
"LEE REMICK AT THE NATIONAL FILM THEATRE” - A vintage audio recording from 1970.
AUDIO COMMENTARY – By Carol Reed biographer William Evans.
ISOLATED MUSIC TRACK
IMAGE GALLERY – Production stills and promotional material.
SUPPLEMENTAL BOOKLET – Essays: “Page to Screen: The Screenwriter and Novelist Behind The Running Man” (profiles the careers of John Mortimer & Shelley Smith)’ “Nowhere to Run: The Making of Carol Reed’s Last Thriller”; “Those Were the Days!” (2010 Article from British Cinematographer magazine, written by John Harris, a camera operator who survived a plane crash while shooting The Running Man).
REVERSIBLE COVER ART
KITTY CONSENSUS: