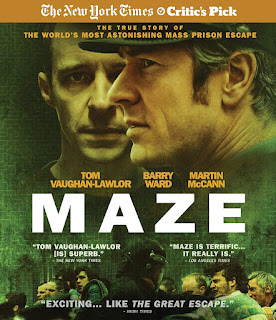 In 1983, 38 members of the IRA managed to escape the HMP Maze, a labyrinthine Irish prison that was considered nearly escape proof. While this 2017 film eventually depicts the event, much of the narrative is focused on the relationship between two men.

One of them is Larry Marley (Tom Vaughn-Lawlor), an IRA leader who’s been incarcerated for ten years and masterminds the escape. Most inmates are either members of the Irish Republication Army or British loyalists. Marley’s status is somewhere in between, since some view him as a traitor for not participating in a recent IRA hunger strike. The other is Gordon (Barry Ward), a warden whose stoic dedication to his job not-only alienates his family, it has made him a potential target of the IRA.

Initially, Marley’s intentions are to use his access to Gordon as part of his escape plan. It’s a contentious relationship at first. Gordon doesn’t mask his contempt for Marley, who he considers a terrorist. But as they get to know each other, both men slowly let their guards down in conversations where they discuss their families and the impact their choices had on them. Ironically, Marley’s wife and son remain close to him, while Gordon has pretty much lost everything except his job, essentially making him a prisoner, as well (which he actually declares at one point). It’s an interesting dichotomy that carries the story to its inevitable conclusion.

Speaking of which, the escape itself ends up being relatively anti-climactic because it focuses more on characters we’re not nearly as invested in. And unlike, say, The Great Escape or Escape from Alcatraz, the film doesn’t spend much time going into the nuts & bolts of the plan, which is arguably what makes most escape movies so fun. But writer-director Stephen Burke obviously has a different agenda, which is fine as long as the viewer is aware of that going in.

I suppose some might also have issues with a protagonist who’s considered by many to be a terrorist, but they’d be missing the point. Painting both main characters as equally sympathetic is more intriguing than depicting one as a saint, the other a monster. The film may be lacking in traditional “great escape” tropes, but it’s ultimately the relationship between two men on opposite sides of the law that drives Maze and makes it worth checking out.