THE NEW YORK RIPPER and the Big Quack Attack 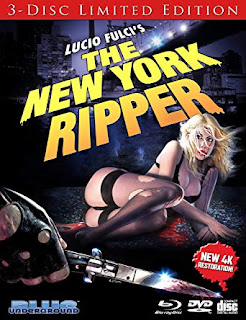 I’ve always had a love-hate relationship with Lucio Fulci’s latter day horror films. Contrary to his rather sizable fanbase, I never felt he was a particularly skilled director and am incredulous at how often he's mentioned in the same breath as Dario Argento and Mario Bava.

On the other hand, despite an imitative career riding the coattails of giants, Fulci excelled at pushing the envelope for onscreen violence. And admittedly, watching just how far the director was willing to go to shock his audience was often entertaining. In the process, Fulci inadvertently managed to create a fair amount of suspense. The suspense didn’t lie in whether-or-not a particular character was going to die. It was in how badly they were going to die, sick thrills not far removed from the fun of watching how spectacularly Wile E. Coyote was gonna fail this time. Maybe that makes Lucio Fulci sort-of a Chuck Jones for gorehounds.

Fulci briefly set aside his brash brand of zombie mayhem to throw his hat in the slasher ring with 1982’s The New York Ripper, arguably his most notorious film. Along with William Lustig’s Maniac, critics condemned it as the very embodiment of misogyny in modern horror. In this case, the accusations aren’t entirely unwarranted. All of the titular killer’s victims are beautiful, highly-sexualized young women. In addition to such Fulci favorites as disembowelings, severed arteries and another scene of ocular trauma that rivals Zombie in the “eeew” department, the killer often targets his victims’ breasts and nether regions.

But despite everything working against it, The New York Ripper might actually be Fulci’s best-constructed film. Sure, the viewer will need to shower off the grime afterwards, but buried beneath the butchery is a genuinely well-paced mystery with a surprising conclusion. Fulci also does a fine job capturing the squalid atmosphere of Times Square as it was back then. And believe it or not, there are a few sequences that approach the tension-filled artistry of Dario Argento.

Three decades later, The New York Ripper remains a challenge to endure for all but the most hardened horror fan, even by Fulci's brutal standards. It’s more sensationalistic than Maniac (to which it’s most-often compared), which is maybe the main reason it feels a bit more exploitative and misogynistic. Of course, Fulci fans will have no complaints with this limited edition 3-disc set. Though not quite on-par with their similar releases of Zombie and Maniac, Blue Underground has beautifully restored and repackaged the film in all of its gory glory. It’s also chock-full of entertaining bonus features, both new and carried over from the 2009 edition. Regardless of how one might feel about the film and its sleazy subtext, there's no arguing that a lot of love went into this new Blu-ray release.