THE ANDROMEDA STRAIN (1971): The Best from Sci-Fi’s True Golden Age 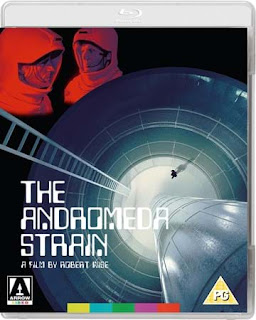 In this writer’s opinion, the golden age of cinematic science-fiction was the decade between 2001: A Space Odyssey and Star Wars. This was the genre at its darkest. Distressing dystopias, cantankerous technology, apocalyptic annihilation...civilization was collectively screwed. And more often than not, these dire consequences were largely our fault.

Growing up on these movies, I found them both terrifying and fascinating. But I drew some comfort in the knowledge that it was merely science-fiction. Surely, none of these horrors could ever come to pass. Right? Right?

1971’s The Andromeda Strain is not only the best science-fiction film from this era, what makes it unnerving even today is that, despite its extraterrestrial threat, everything seems totally plausible. A satellite crashes in a small desert town, carrying a lethal microscopic organism that swiftly kills everyone, save for an old man and a baby who are seemingly immune to its effects. They are taken to an underground facility, code-named Wildfire, where a small team of scientific experts attempt to identify what they think might be some kind of virus.

Much of the film takes place in Wildfire, depicting the methodical, painstaking process. The implications are dire. The germ – given the name, Andromeda – is not-only instantly lethal, it’s growing exponentially. What makes the scenario especially ominous is that the crew assembled are the best in their fields, and even they are mostly dumbfounded since Andromeda's existence is contrary to any known organism. Even worse are the simple "shit-happens" moments, when everything is nearly undone by human error or faulty machinery. We've all been there and its scary to realize it can even happen when stakes are at their highest.

Based on an early Michael Crichton novel, The Andromeda Strain is masterpiece of controlled tension. Aided considerably by impressively antiseptic production design – namely, the Wildfire facility – director Robert Wise wisely eschews melodramatics, a traditional music score and any real characterization in favor of the authenticity of its concept. Everything we see and hear is believable, including Andromeda itself. It’s a scary-ass bug to begin with, but the more were learn about it, the more malevolent it becomes.

The Andromeda Strain is also proof that G-rated movies could be pretty hardcore back in the fun-loving 70s, exposing impressionable youth to nudity, buzzard-chewed bodies, lab animals’ agonizing death-throes and a corpse’s wrist being surgically slit-open. So either the MPAA thinks today’s children are a bunch of pampered pussies or the organization never knew what the fuck they were doing in the first place. Probably a bit of both.

Despite its age, length and complete lack of traditional action, The Andromeda Strain remains an exemplary example of golden-age science-fiction. Perhaps the best example, since death-from-within is still a real apocalyptic possibility, making its concept more contemporary than wondering what Soylent Green is made of. It has been released on Blu-ray before, but this version from Arrow Films gives it a considerable facelift with a nice 4K scan restoration, remastered audio and a few nifty new extras to go along with some substantial vintage features. An all-around great release and highly recommended for anyone who loves smart, plausible science-fiction.

MEE-OW! LIKE TAUNTING A MOUSE TO DEATH
Posted by D.M. Anderson at 9:47 PM