NONE BUT THE BRAVE (1965): Sinatra the Selfless 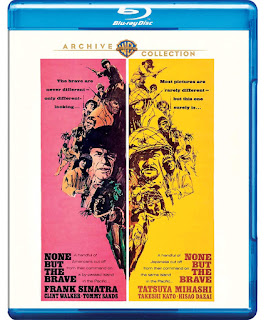 None but the Brave has the distinction of being the only film directed by Frank Sinatra. Considering his clout at the time, it's kind-of surprising this didn't turn out to be a vanity project. In fact, despite being top-billed, Ol’ Blue Eyes selflessly doesn’t even play the main character.

That distinction is shared by Clint Walker as Capt. Bourke and Tatsuya Mihashi as Lt. Kuroki, commanders of their American and Japanese squads, both of which end up marooned on a deserted Pacific island during World War II. Kuroki’s men have been stuck there so long that their own Army seems to have forgotten about them. Then an American plane is shot down, initially bringing the war with them. But after a few deadly skirmishes, both commanders realize they might need each other in order to survive.

To the chagrin of a few gung-ho subordinates, both sides form an uneasy truce, which threatens to fall apart at any given moment. Bourke and Kuroki develop a mutual respect for each other and friendships are formed among some of the others, leading to a few epiphanies about their dedication to duty. Ultimately, None but the Brave ends up delivering a poignant anti-war message.

While relationship between Bourke and Kuroki is the crux of the story, None but the Brave is just-as-much an ensemble piece. Playing Chief Pharmacist-turned-medic Mate Francis, Sinatra does give himself the single best scene in the entire film – tasked by Bourke to save a wounded Japanese soldier’s life – but generously shares the spotlight with a fine American & Japanese cast. The one exception might be Tommy Sands, who severely overdoes it as jingoistic Marine Lt. Blair, sounding like a cross between Forrest Gump and a bullhorn.

Other than that, None but the Brave is enjoyable, no-frills entertainment, directed by the Chairman with workmanlike skill. While fans may be surprised by his comparatively sparse screen-time, Sinatra selflessly supports his cast with the film’s best performance.