HOW TO STUFF A WILD BIKINI: Silliness from the '60s 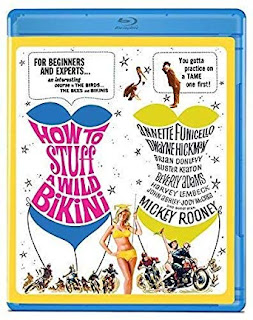 Watching How to Stuff a Wild Bikini five decades on is sort-of a surreal experience. In this day and age of social awareness, it’s almost shocking how lovingly the camera leers over every female curve, to say nothing of a title song – belted out by an assembly line of Barbies & Kens - that defines the perfect bikini body. An amusing reminder that the 60s were a different time, when the beach party movie was a genre unto itself, which no studio purveyed as prolifically as American-International Pictures (AIP).

The AIP movies more-or-less adhered to the same formula: Annette Funicello & Frankie Avalon; a batch of lesser-known-but-just-as-photogenic young actors; “guest stars” consisting of familiar faces in supporting roles (most on the downside of their career); bouncy, forgettable songs; cameos by up-and-coming new bands. Additionally, most were outrageously plotted (when they actually chose to have one). William Asher – who directed a lot of ‘em – had no qualms about livening things up with mad scientists, Martians and, in this case, witch doctors.

How to Stuff a Wild Bikini is as representative of the subgenre as any of the others, with a threadbare plot no more ridiculous than modern day tripe like Jason X or Sharknado. The film is also noteworthy for featuring Funicello as the only fully-clothed kid on the beach (she was pregnant at the time), while  Avalon himself only appears in a few token scenes (which look like they were all shot in a day). Ultimately, it’s a haphazardly thrown-together mish-mash of silly songs, eye-rolling gags and hammy performances. Of the cast, Harvey Lembeck has fun as Hollywood’s version of a rebel biker, while Buster Keaton looks thoroughly depressed to appear in yet-another beach party movie. Keep a sharp eye out for an amusing cameo by Elizabeth Montgomery (Asher’s wife at the time).

It was never what anyone ever mistook for a good film and its harmless sexism might seem a bit jawdropping today. But this is what often passed for teen-centric entertainment back then, so from a historical perspective, How to Stuff a Wild Bikini makes interesting viewing.

NOT BAD. NO BETTER OR WORSE THAN ANY OTHER BEACH PARTY MOVIE.
Posted by D.M. Anderson at 1:43 PM