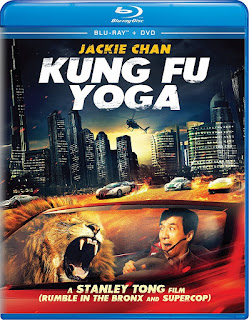 Near the beginning of Kung Fu Yoga, there's a brief scene where a few of our protagonists engage in some tendon-snapping stretches. Since yoga figures absolutely nowhere in the actual plot and is never mentioned again, I'm assuming it was included so they could give the film a funny title.

It's just as good a title as anything else, since this reteaming of Jackie Chan and director Stanley Tong (Supercop, Rumble in the Bronx) is a kitchen-sink collection of action/comedy set pieces assembled into an Indiana Jones plot filtered through Chuck Jones. The film gives us ancient maps, lost treasure, hidden tombs, angry snakes and booby-trapped lairs as Chan leads an eclectic batch of archeologists, treasure hunters and yoga experts to battle an Indian megalomaniac, cannon fodder henchmen, killer hyenas and a grumpy lion riding shotgun in an SUV. We're whisked to one exotic location after another, from the glacial caverns of Tibet to the immaculate palaces of Dubai. And everything culminates in an epic Bollywood dance number.

At no point does the film approach anything resembling plausibility, nor does it really try. For example, the extended car chase through the streets of Dubai is played almost entirely for laughs, such as when our villain escapes his suddenly airborne vehicle by stepping out at just the right time, then walks away without a scratch. Speaking of which, the ample amount of CGI is so terrible that one begins to suspect it is intentional. In fact, during the opening prologue, my wife was sure it would be revealed to be a character playing a video game.

Still, Kung Fu Yoga is often quite funny. While the humor is mostly of the slapstick variety, some of the dialogue is priceless, as when one character, held hostage, begins to cry, "I'm gonna die! I mean, I know everybody dies, but I'm gonna die right now!" Jackie Chan is affable and charming as usual. While not as limber as he used to be, he's still a terrific physical performer. Chan also seems more than happy to share the spotlight with the rest of the cast, all of whom have their amusing moments (even the bad guys come across as sort-of congenial).

Kung Fu Yoga is one of those movies where, if you aren't already onboard the crazy train, you'll find it insufferable. Nearly a live-action cartoon, the film never takes itself too seriously and nor should the viewer. This one is for those looking for nothing more than colorful, silly, inoffensive entertainment.