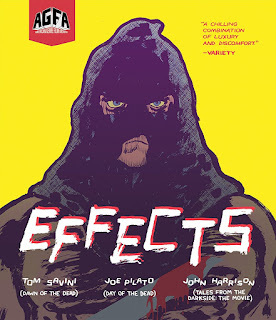 On the outer fringes of the Romeroverse lurks Effects, a grassroots Pittsburgh production that was never given a proper release. There's nary a single zombie to be found and the film itself is unremarkable. But it's particularly noteworthy today for featuring early appearances by a few guys who'd soon become horror icons under George A. Romero's wing, most notably Tom Savini and Joe Pilato.

Effects features another of Romero's alumni, John Harrison (Creepshow composer & Tales from the Darkside director), as Lacey, an unhinged filmmaker who's supposedly directing a horror movie, when in-reality he's making a snuff film using his cast and crew as victims. It's a terrifically twisted concept and the film is pretty well made considering its shoestring budget, but undone by an overly-talky script, scattershot pacing and rambling scenes where not much happens outside of partying.

But the curiosity factor alone makes Effects worth checking out. Think about it...few cult actors are as legendary for a single performance as Joe Pilato. Three decades after Day of the Dead, he's still synonymous with Captain Rhodes because most of us haven't really seen him in anything else. He's sort-of a revelation in Effects - and a leading man, of all things! - playing a congenial cameraman who's almost the polar opposite of his most iconic role: soft-spoken, handsome, charming and...well, likable.

Tom Savini may be a horror legend, but those hoping to see his horrific make-up skills will phenomenally disappointed. Though he does provide the film's few effects (which are tame compared to his later work), he's mostly utilized as an actor here, playing an obnoxious crony who's in cahoots with Lacey. Savini's always been a decent actor, and although he has relatively little screen time, he turns in an amusing performance.

Effects will hold little interest for casual viewers, who'll likely be put-off by its bargain-basement production and dull execution. From a historical perspective, however, this disc is a must-own for those obsessed with anything even tenuously connected to George A. Romero. It also includes an hour-long documentary that's arguably more entertaining than the movie itself.

NOT BAD...FROM A HISTORICAL PERSPECTIVE
Posted by D.M. Anderson at 6:13 PM