DVD Review: BRITNEY EVER AFTER 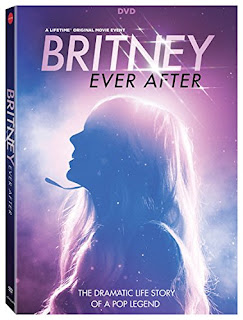 My oldest daughter has always loved all things Britney Spears - even during years when it wasn't fashionable - and even she had to rage-quit this movie after about 30 minutes.

As hard as it might be for some of us to wrap our heads around, this prolific pop tart has been pumping out softcore silliness for nearly twenty years. That's roughly 15 years after I assumed she'd end up desperately clinging to fame on a season of Dancing with the Stars. At the very least, Britney Spears deserves some kudos for longevity.

As a decades-long source of tabloid fodder, who sells sex and songs with equal abandon, Spears' career is certainly a worthy subject for a music bio, no matter how superficial. But Britney Ever After barely even tries. It's a biography only in the sense that its subject exists. Abe Lincoln did, too, but we're pretty certain he never hunted vampires.

You know you're in trouble when a movie about a musician doesn't include any of their actual music. None of Spears' own songs are featured. And though she's been renowned for years as the reigning diva at MTV's Video Music Awards, Britney's antics are depicted on the chuckleworthy "Music Awards". Lifetime - longtime purveyors of fan-baiting claptrap - obviously had no legal permission to feature either.

But that's just nitpicking. While admittedly not a fan of Britney or her questionable musical abilities, I don't believe she's an idiot. Here, she's initially portrayed as the type of dumb, backwoods hick you'd expect to see popping out of the cornfield in an old Hee-Haw episode. Then before you can say "Oops, I Did it Again,", she's a spoiled, oversexed, man-hungry valley girl who settles a marital spat with Justin Timberlake by challenging him to a dance-off.

Britney Ever After cheaply & inaccurately re-enacts the more tabloid-worthy parts of her career, then speculates the rest (Really? A sex tape?). The narrative jumps from point A to B with little or no transition, essentially rendering the whole thing a series of unrelated film clips. The actors only superficially resemble their real life counterparts and perform like high-schoolers imagining what pop stardom is like.

I can't imagine Britney Ever After appealing to her die hard fans, who'd likely be insulted by this lazy & shallow attempt to capitalize on their adulation. Since nobody else is going to care, this cynically-produced ratings grabber is nothing more than a cable TV version of click-bait.

BLEH...LIKE COUGHING UP A HAIRBALL
Posted by D.M. Anderson at 12:19 PM