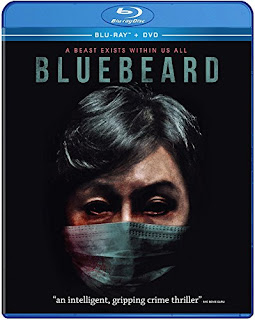 Did I miss something while watching Bluebeard?

I could see what they were trying to do by giving us a main character we don't entirely trust, making us question whether or not what he's experiencing is real. Cho Jin-woong plays Byun, a troubled doctor who's estranged from his ex-wife and living alone in a cluttered, tiny apartment. Once the owner of a clinic which went bankrupt, he now performs colonoscopies in a crime-ridden part of town to make ends meet. There's also a serial killer on the loose, and one of the dismembered victims has recently been discovered in a nearby river.

As a favor to his landlord, Jung Sung-geun (Kim Dae-myung), Byun examines his father (Shin Goo). But while sedated, the old man describes gruesome details of one of the murders. Though he befriends Jung, Byun begins to suspect the Sung-geun family (who also own a butcher shop in the same building) are the serial killers everyone is looking for, especially after he spots what looks like a human head in their meat locker. That same head pops up in his own freezer, then disappears the next day. Later, his ex-wife disappears right after a recent visit, prompting Byun to find evidence to expose the Sung-geuns.

Bluebeard does so many things right that it's a shame the film undoes itself during the final act. Director Lee Soo-yeon does an exemplary job creating a moody, surreal tone, with some creepy, hallucinatory sequences and effectively deliberate pacing. As Byun, Cho Jin-woong hits all the right notes as a tormented doctor whose life has recently taken some dark turns, and we're intrigued to learn exactly what led him to his sorry state. But unlike similar films which depend on deceiving the viewer to set up a big twist, we almost immediately begin to suspect something's not quite right with Byun.

Bluebeard's "failure" to pull the wool over our eyes isn't the problem, though. After all, I know the outcome of every sports movie ever made, but still enjoy them. Without providing spoilers, the biggest issue is the final act, where previous events are laborously revisited from a different perspective. But then the subsequent resolution undermines its own story by throwing us another curveball which, based on what we've already been presented with, rings false. Unless I completely overlooked some vital piece of information - a subtle hint, a throwaway line, my willingness to suspend disbelief - I don't see how the denouement is even possible.

Still, I find myself thinking a lot about the plausibility of that ending, and maybe that was the film's purpose all along. Maybe it intended to confound its own logic   just to get a rise out of the viewer. Whatever the case, Bluebeard's dark tone and solid performances may not be enough for us to forgive the narrative shortcomings, but at least the journey is kind of interesting.