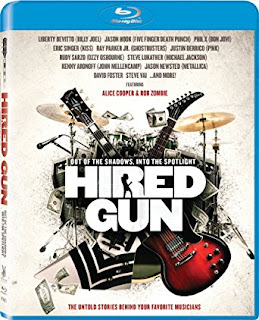 Hired guns are those professional musicians whose names you don't know, whose faces don't grace album covers and whose stage presence is overshadowed by the star we actually pay to see. Yet at the same time, it's often their contributions that turn an ordinary - or even terrible - song into a classic.

It's seems like an odd, thankless profession. After taking years to master your instrument, you spend your career making someone else sound good. You regularly perform before thousands of screaming fans, yet none of them are there to see you. Your creative abilities may be in high demand, but you'll seldom get any credit for it. It can be a lucrative way to make a living, but there's nothing resembling job security, even if you've been Billy Joel's drummer for twenty years.

Hired Guns is a fascinating - and long overdue - documentary about a dozen or so of these unsung heroes. Featuring several candid interviews, we meet such legendary session musicians as drummer Kenny Aronoff, who commands a ton of respect from his peers, and bassist Rudy Sarzo, who's played in just about every metal band on the planet, but mostly discusses his tenure with Ozzy Osbourne (as well as the death of Randy Rhodes, arguably the most famous hired gun of all time).

Personally, I found Liberty DeVitto's story the most interesting (and ultimately bittersweet). DeVitto and two friends spent their entire professional career as Billy Joel's back-up band, only to be unceremoniously tossed aside for younger players. Additionally, Jason Hook's career could make an pretty great Hollywood success story all by itself. A rocker at-heart, he paid the bills for years as a guitarist for such pop tarts as Mandy Moore and Hillary Duff before landing a plum spot in Alice Cooper's band. Finally, he graduated from hired gun to full-blown rock star as a member of Five Finger Death Punch, currently one of the biggest heavy metal bands in the world.

In addition to concert footage, some of these musicians get together to crank out a few killer tunes in the studio. There are also a few vintage interviews with superstars (like P!nk and the maligned Billy Joel) who owe much to their back-up musicians. Rob Zombie, Alice Cooper and producer David Foster are also interviewed for this film, who discuss the importance of a well-functioning band (it isn't always just great musicianship).

For the most part, the subjects talk fondly of their chosen profession, even if few have attained any notoriety outside their circle of fellow musicians. Most are in it for the love of playing, anyway. Most importantly, Hired Guns turns their stories into a very entertaining film, about music we've all heard from the perspective of those we haven't. This is definitely must-own disc for music fans of any genre. 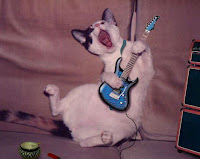 MEE-OW! LIKE BEING TURNED LOOSE IN A BIRD SANCTUARY.
Posted by D.M. Anderson at 5:30 PM