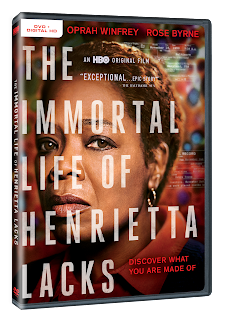 “Witness Oprah Winfrey give one of the best performances of her career”- Variety
An African-American woman becomes the unwitting pioneer for multiple medical developments, such as the Polio vaccine, when her cells are harvested to create the first immortal human cell line. Her story, previously lost in history, is brought to life in HBO® Films’ The Immortal Life of Henrietta Lacks. Led by Oscar® nominee and TV icon Oprah Winfrey and Emmy® nominee Rose Byrne, the “Intriguing and thought provoking” (The New York Times) HBO® Film, The Immortal Life of Henrietta Lacks, is available to own on Blu-RayTM and DVD September 5, 2017.
​​In this adaptation of Rebecca Skloot’s critically acclaimed, bestselling nonfiction book of the same name, The Immortal Life of Henrietta Lacks is told through the eyes of Henrietta Lacks’ daughter, Deborah Lacks (Winfrey). The film chronicles her search, along with journalist Rebecca Skloot (Byrne), to learn about the mother she never knew and understand how the unauthorized harvesting of Lacks’ cancerous cells in 1951 led to unprecedented medical breakthroughs, changing countless lives and the face of medicine forever. With a supporting cast that includes Renée Elise Goldsberry, Reg E. Cathey, Courtney B. Vance, Ruben Santiago-Hudson, Leslie Uggams, Reed Birney, Rocky Carroll and John Douglas Thompson, The Immortal Life of Henrietta Lacks is a story of medical arrogance and triumph, race, poverty, and deep friendship between the unlikeliest of people.
TO ENTER:
Leave us a message in the KITTY CONTACT form in our sidebar. Your email will not be shared or used for any other purpose.
THE IMMORTAL LIFE OF HENRIETTA LACKS
Available on Blu-ray™ and DVD September 5, 2017
Posted by D.M. Anderson at 7:32 PM