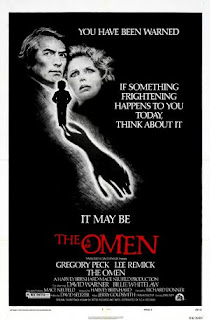 It was near the end of sixth grade when The Omen crept onto my radar. Before that, 666 was simply the number which followed 665.

The trailer was spooky as hell, as was the appearance of the title itself in the newspaper ads, with three sixes symbolically stamped inside the 'O'. I didn't know what it meant, or what the movie was even about, but those numbers were intriguingly ominous.

This was also the time when puke colored Pee-Chees were the school folder of choice for many kids. There were handy math & science tips located on the inside pockets (the multiplication chart is the only reason I still remember that 12 x 12 equals 144), and generic illustrations of high school athletes which practically begged for afro enhancement or arrows in their heads. And we all knew someone who revised 'Pee-Chee All Season Portfolio' to read, 'Kissing is Pee-Chee, but sex is an all season sport.'

There was also plenty of empty space left to scribble band logos, expletives or the name of your current crush. Ever the movie fanatic, I used to draw titles and tag lines all over my Pee-Chee the way my peers painstakingly drew the KISS logo on theirs. When The Omen came out, I drew those sixes with a red marker as accurately as I could. I still didn't know what they meant, but man, it looked cool. The girl seated next to me, Suzanne, saw it and issued this dire warning: "That's the Devil's number! You're gonna go to Hell for that!"

Even though I told her it was from a movie, she went and informed the teacher, Mrs. Swanson, who was apparently unconcerned that I had just damned myself. She simply told the Suzanne to sit back down and reminded me get back to reducing my fractions (which none of my Pee-Chee charts could help me with).

Suzanne's comment, and the fact she thought my actions were blasphemous enough to rat me out, weighed heavily on me. The Devil's number? Oh, man, what have I done? On the plus side, Suzanne didn't talk to me for the remainder of the year. She was a sanctimonious little shit who went on become an equally sanctimonious cheerleader in high school (I know, because she refused to go out with me).

Now that I knew 666 was associated with Ol' Scratch himself, my sixth-grade mind deduced that The Omen must not only be scary, but evil. I'd seen horror movies before, but never one that suggested I'd risk my soul just watching it. For an impressionable youth like me, that meant only one thing: challenge accepted!

When the movie opened at the nearby Southgate Quad later that summer, a few friends and I cheerfully peddled our bikes toward damnation. Since The Omen was rated R, we further-tarnished our souls by sneaking into this one after buying tickets for one of the PG movies playing there.

In The Omen, Gregory Peck is Robert Thorn, the American ambassador in England with his pregnant wife, Katherine (Lee Remick). After Robert is told their baby was stillborn - and Katherine was apparently kept out of the loop - a creepy priest suggests replacing it with another newborn whose mother just died. Robert agrees to raise it as his own to avoid breaking Katherine's heart.

The Thorns lead an idyllic life until bizarre things begin to happen: their nanny hangs herself, baboons go apeshit (no pun intended) in Damien's presence and the kid freaks out whenever he gets near a church. A few folks figure out Damien is actually the Antichrist, but most die before they can convince the Thorns. Those spectacular death scenes were a big draw for The Omen back then, including the iconic onscreen decapitation by a wayward pane of glass, which certainly wasn't something you saw everyday, even in a horror film.

As Robert begins to suspect Damien might be behind more nasty doings than simply soiling some diapers, he and photographer Keith Jennings (David Warner) do some investigating. They learn Damien's arrival was foretold in the Book of Revelations and has been watched over and protected from birth by Satanists, including their new nanny, the family dog (bad dog, indeed) and the priest who suggested the baby swap in the first place.

After Katherine is killed, Robert realizes Damien must die. The only way to kill the Antichrist is to stab him in a church with seven holy daggers. Robert drags Damien kicking & screaming to the alter, but just as he's about to use the first dagger, he is shot and killed by police.

If you know anything about how movies work, you also know I haven't really provided any spoilers. First of all, the title of the first sequel, Damien: Omen II, gives away the fact the kid lives. Not only that, killing children onscreen remains mostly taboo by major studios, even if the character is a spawn of Satan. No way in hell would 20th Century Fox ever release a potential summer blockbuster that ends with a legendary & beloved icon like Gregory Peck stabbing a five year old seven times.

Maybe for people who take the Bible literally (like Suzanne), The Omen and its Cliff's Notes depiction of the Antichrist might be considered evil, especially since evil wins. Other than Rosemary's Baby, there weren't too many other mainstream horror films where the devil emerges triumphant. That bleak, foreboding resolution was a big part of what made The Omen pretty scary.

Unlike the esoteric dread of Rosemary's Baby or The Exorcist's existential crises, The Omen's brand of evil was easy to digest and instantly identifiable...just check your kid's scalp the same way you'd check for lice. If you spot three sixes, he's gonna destroy the world and must therefore die. Until Star Wars came along, the conflict between good and evil didn't get any simpler than that.

The Omen's impact on popular culture was significant, particularly its use of the number 666. Many of us those who never even cracked open a Bible suddenly saw "the devil's number" everywhere...in UPC codes, on street addresses and Black Sabbath album covers (of course). People even wanted to change their phone numbers to avoid being stuck with 666 prefixes. The number was scary and intriguing at the same time.

In 1982, Iron Maiden released their classic song, "The Number of the Beast," complete with a paraphrased spoken-word intro from the Book of Revelations. Bassist/songwriter Steve Harris was inspired by Damien: Omen II, which gave him nightmares (officially making him the only person ever scared by Omen II). These were the good ol' days when "Satanic Panic" had puritanic parents and watchdogs more concerned with protecting impressionable youth from falling in league with the devil than teaching them to practice safe sex. While other bands were long-suspected of putting subliminal shout-outs to Satan in their music, here was Iron Maiden screaming it on-high right in the fucking chorus:

Six...six six!
The Number of the Beast;
Hell...and fire
Was spawned to be released!

Compared to the black metal bands who'd later ooze out of Norway, Maiden's demonic noodlings sound as harmless as a Pat Boone record. But at the time, these guys displayed some epic balls to put that shit right out-front for the world to hear. Hell, a tiny part of me feared for my soul for simply enjoying it. That song and its blasphemously catchy chorus briefly made Iron Maiden the most terrifying band in the world. Ironically, anyone who actually took the time to read the lyrics would realize they weren't promoting Satanism at all.

The Omen's legacy doesn't stop there. For years after it was released, the very name, Damien, epitomized evil to people who thought a lot like Suzanne. They'd point out that it sounds like demon, and some idiots believed it actually meant "son of the devil." Nearly 20 years later, when my wife and I were expecting our first child and pondering baby names, she flat-out refused to consider Damien when I suggested it. Because of its sinister connection to the movie, she didn't want any kid of ours strapped with that kind of cultural baggage. Though I was initially dejected, it turned out to be a moot point since we had a girl (we named her Medusa, though it's spelled N-A-T-A-L-I-E).

Actually, despite its evil implications, the name dramatically increased in popularity after its use in both The Exorcist and The Omen. That could be a coincidence, of course, but while I'm sure some folks were inspired by The Exorcist's Father Damien's existentially-troubled character, it's safe to assume more-than-a-few twisted couples chose it because of a blue-eyed toddler who tried to kill his mother with a tricycle.

Of course, all things fade with time and we're more than a generation removed from The Omen's insidious cultural influence. Only the most literal-minded zealots still piss themselves when accosted by three sixes. Not even a pointless remake of the film (premiering with considerable studio hype on June 6, 2006 at 6:06:06 in the morning) could restore the number to its former evil glory. To this generation, Iron Maiden's most notorious song is simply a challenging level in the Guitar Hero video game. The name of Damien is no longer synonymous with the Antichrist (I would say Donald has that distinction right now). People are currently more familiar with Damian Lillard than Damien Thorn. As a teacher in the real world, I recently had a boy in my class named Damien. A nice kid, but when I once made a joking Omen reference regarding his name, he appeared to have no clue what I was talking about (or maybe I just wasn't very fuckin' funny).

All that being said, The Omen gave many kids of my generation a terrifying introduction to the devil, albeit a simplistic one (much like kids from the 1950s who learned about Moses from The Ten Commandments). The movie has actually aged pretty well, though. Its creative methods of human demise may seem rather quaint to those raised on Final Destination, but the foreboding tone and atmosphere (helped immeasurably by Jerry Goldsmith's Oscar-winning score) hasn't been equaled by too many supernatural horror films since.
Posted by D.M. Anderson at 10:42 PM