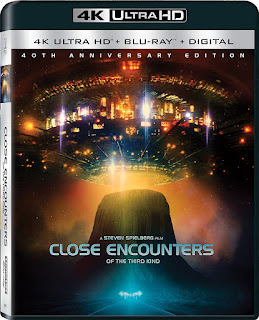 Following its exclusive one week engagement in theaters across the country starting September 1, Sony Pictures Home Entertainment celebrates the 40th anniversary of legendary director Steven Spielberg’s epic adventure CLOSE ENCOUNTERS OF THE THIRD KIND on September 19 with the new 4K restoration available on 3-disc 4K Ultra HD, a Limited Edition 3-disc 4K Ultra HD “Light and Sound” Gift Set, and in high-def on 2-disc remastered Blu-ray. A must-own for all true fans, the highly collectible Limited Edition Gift Set features illuminated packaging that plays the iconic 5-tone motif. Also included is an expanded booklet with rare archival photos. Both Blu-ray and 4K Ultra HD releases include all three restored versions of the film, including the 1977 theatrical version, the 1980 Special Edition and the 1997 Director’s Cut. 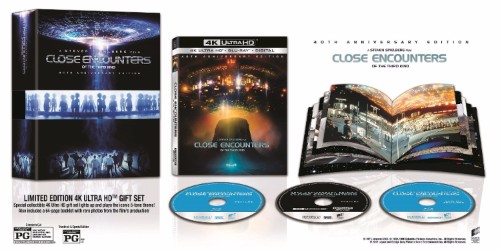 In addition to the legacy bonus materials, the CLOSE ENCOUNTERS OF THE THIRD KIND Blu-ray comes with new bonus content, including rare, never-before-seen home movies and gags from the set, and the all-new featurette “Three Kinds of Close Encounters.” This featurette includes a new interview with director Steven Spielberg on the legacy of the film, as well as new interviews with directors J.J. Abrams (Star Wars: The Force Awakens) and Denis Villeneuve (Arrival) on the impact of Close Encounters.
Posted by D.M. Anderson at 9:57 AM