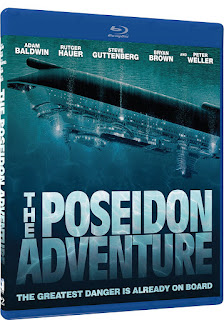 We all know the story...on New Year's Eve during her final voyage, the SS Poseidon is struck by a massive tidal wave which capsizes the ship. The survivors must now make their way to the hull and hope for a rescue before it sinks for good.

Well, purists be prepared, because this 2005 made-for-TV remake of The Poseidon Adventure commits heresy by removing the tidal wave from a story that was mostly about a tidal wave. The original is unarguably a disaster movie classic, though not such a sacred cinematic cow that a remake is out of the question (a lot of folks in Hollywood must have agreed because we got two within a year). But, seriously...no tidal wave? Whose idea was that...George Lucas'?

Like attempting to enjoy a meatless burger, disaster buffs just need to suck it up and accept the idea that an oceanliner can be capsized by an exploding beer keg.

Actually, the keg is one of several bombs that are brought on-board by an unnamed group of terrorists. It's never made clear exactly what their beef is, but much of the first hour - besides introducing a variety of ill-fated passengers - focuses on this plot, with grumpy Sea Marshal Mike Rogo (Adam Baldwin) searching the ship for terrorists. This is The Poseidon Adventure in-name-only until the ship finally capsizes. Perhaps the producers chose the terrorist route because, considering the already-terrible CGI, recreating a convincing tidal wave was an insurmountable task. Or maybe there wasn't enough meat to the original story to justify the four hour running time a miniseries generally requires.

But believe it or not, the movie improves as it goes along and the stuntwork itself is rather impressive. Better yet, it starts to resemble the Poseidon Adventure of old during the second half. Several escape sequences are more-or-less recreated pretty faithfully, albeit on a TV budget.

Some of the characters - both familiar and new - are actually pretty interesting. Baldwin, in a rare leading role, is suitably badass, while Rutger Hauer is surprisingly effective as a tough-but-kindly priest. To be honest, I always hated Shelley Winter's whiny, obnoxious performance in the original, but Sylvia Syms does wonders with the same character, rendering her subtly endearing and sympathetic.

In fact, most of the cast and their characters are decent as TV movies go. One glaring exception is Steve Guttenberg as Richard. Having a face that's inherently punchable is bad enough, but he's also stuck with one of the most repugnant characters I've ever seen in a disaster movie (taking into account every movie in the Airport franchise, that's saying something). This is a guy who abandons his entire family to shack up with the ship's masseuse for the rest of the trip, then we're expected to hope he survives the disaster. Worse yet, even though time is rapidly running out, everyone is repeatedly forced to halt their escape plans while Richard makes impassioned declarations of love to his wife and kids (and Guttenberg can't emote worth a damn). But even after that, while his wife looks on, he still mourns the death of the chick he's been boinking.

That brutal story & casting decision aside, the movie itself isn't all that bad once you get over the fact no tidal wave is forthcoming. Sure, like a lot of "event" miniseries that were popular at the time, The Poseidon Adventure is too long by an hour (further padded by needless scenes of rescue efforts) and the special effects are terrible, but this often-dubious genre has produced bigger stinkers, including its mega-budget brethren, Poseidon, which is far more spectacular, but works better as a sleep aid.