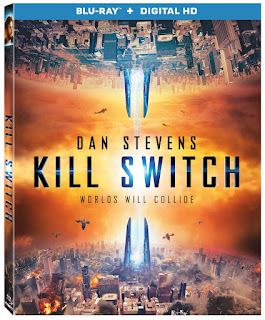 In the near future, the Alterplex corporation has developed and built a massive device that will provide unlimited energy to the world. It does this by sucking energy from The Echo, a mirror universe created by the machine. When this begins to trigger bizarre interdimensional disasters, NASA pilot Will Porter (Dan Stevens) is recruited to travel into The Echo and close the link between both worlds using a black box called the Redivider. This will also destroy The Echo, but failure to do so will result in the end of both worlds. However, even though The Echo is supposed to be devoid of biological life, people identical to those in the real world exist there and understandably don't relish the thought of extinction.

It will come as no surprise that director/producer TimSmiT's background is in CG special effects, which he created for this film as well. Considering the film's limited budget, Kill Switch is visually impressive, with boats and railroad cars falling from the sky and deadly police drones patrolling the city. However, while the  ramifications of multidimensional interaction is a concept just begging to be explored, everything takes a backseat to barrages of gunfire and explosions.

Fans of Stevens will also be disappointed to learn he only appears onscreen in flashback sequences, which are periodically dispersed throughout the film to provide exposition (including a pointless subplot involving his sister and her troubled son). The rest of plays like a first-person shooter video game, shown entirely from Porter's point of view. While initially interesting, the gimmick is nothing new and grows tiresome after awhile.

As it is, Kill Switch certainly watchable. It seldom slows down for a minute and boasts enough mayhem to please undemanding action fans. But by choosing spectacle over substance, it's also a missed opportunity. With a concept like that, our brains should be as engaged as our eyes.

NOT BAD...BUT A MISSED OPPORTUNITY
Posted by D.M. Anderson at 6:41 PM