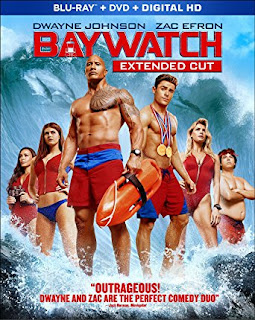 You're looking at the one American male over 40 who never sat through a single episode of the original Baywatch. It always looked like an idiotic T&A version of Scooby-Doo. Maybe that's why the film's best running gag works so well.

That gag: The entire Baywatch gang (led by Dwayne Johnson) are under the delusion that their occupation is a noble calling for the capable few, one that extends beyond the beach to include detective work and protecting the community from nefarious bad guys. Everyone else sees them for what they are: simple lifeguards.

Had that joke been the primary focus of the actual story, Baywatch could have been another Brady Bunch Movie, a self-aware, morbidly amusing film about characters stuck in their own little bubble, oblivious to reality. Instead, an actual plot is thrown in, which has the audacity to take itself relatively seriously.

While Baywatch isn't as bad as the critical consensus suggests, the biggest problem is the film doesn't pick one tone and stick with it. At times it approaches the type of satire you'd see in Airplane! before shifting to lowbrow dick jokes. The humor ranges from cleverly self-aware to stupid slapstick. Some of it is funny, just as often not. When it abruptly turns into an action film, everything is pretty-much played straight-up. For example, another running gag has C.J. always jogging in slow-motion (an amusing nod to the original series' jiggle appeal). However, whenever Johnson is called into action, slo-mo is employed to emphasize the awesomeness of the stunt.

Both Johnson and Zac Efron have previously demonstrated comic chops, which are certainly on display here. They're obviously in on the joke whenever the film is in comedy mode, and by now, Efron has the hunky idiot market cornered. However, amid the six-pack abs and bouncing boobs is Ronnie, the obligatory rube who exists to be laughed at for his comparatively poor physique and social awkwardness. Stuck with a majority of the most embarrassing gags, I sometimes found myself feeling almost sorry for the actor who plays him (Jon Bass).

Still, despite its wild inconsistencies, Baywatch isn't a terrible movie. Sure, opportunities for clever satire are often squandered and I'm thankful I passed on it in theaters, but I expected a lot worse. When it places humor over heroics, it's even laugh-out-loud funny on occasion.