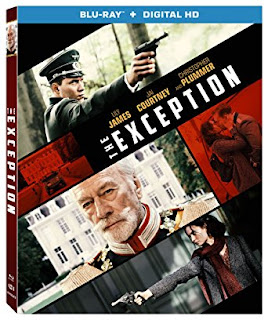 The Nazis have recently invaded Holland, where Germany's former leader, Kaiser Wilhelm (Christopher Plummer) is living in exile. While he has no political power during the Nazi campaign, they are concerned with reports that a Dutch spy is lurking around to kill him. So Captain Brandt (Jai Courtney) is charged with protecting Kaiser and his wife.

On the day of his arrival at their mansion, he meets house-servant Mieke (Lily James). In a couple of rather graphically gratuitous moments, they have explicit sex before even learning each other's names. Just when you think The Exception is going to be one of those movies, along comes the plot, which plays its hand earlier than one might expect...

Brandt is the 'exception' of the title, an SS officer who is appalled at what the Nazis are doing, and tormented by nightmares of the horrors he's witnessed. In a revelation that'll surprise no one, Mieke turns out to be the spy the Nazis are looking for, in addition to being Jewish. Kaiser himself, while still loyal to his country, does not approve of the Nazis' methods. Though a tad eccentric, he's kindly, sympathetic toward the Dutch and ultimately horrified upon learning some of Heinrich Himmler's atrocities.

The film takes time establishing its players, but despite their initial full-frontal encounters, the 'romance' between Brandt & Mieke doesn't resonate all that much. Still, Courtney and James are appealing enough to make us care about them. Plummer, on the other hand, effortlessly steals every scene he's in. Though his role is far from a cameo, it's too bad Kaiser isn't the central character. Elsewhere, the film is relatively slow-going until the final act, which provides a fair amount of suspense and comes to a satisfying conclusion.

Those looking for the usual action and romance often found in a WWII drama may be disappointed. The Exception doesn't have much of either, despite a few fleeting efforts to establish its two leads through decidedly non-erotic sex. However, the story itself is just interesting enough to keep us watching, as is Plummer's wonderful performance.

NOT BAD...THOUGH NOT EXCEPTIONAL (cat humor)
Posted by D.M. Anderson at 5:51 PM