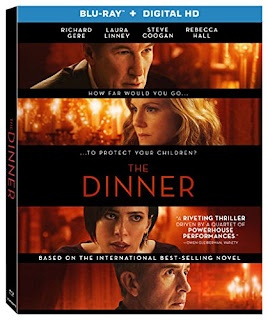 Watching The Dinner is like sitting at a poker table with someone who plays like each hand is the last one. Every time it's his bet, he hems & haws, fumbles with his chips and repeatedly checks the cards in his hand as though they'll magically change. Then after an eternity of contemplation - and everyone at the table is ready to kill him - he folds anyway.

An admittedly good cast is wasted in this frustrating tease of a movie that's about as entertaining as a tax audit and, like your poker friend's tactics, ends up being much ado about nothing. Two estranged brothers and their wives meet at a ritzy restaurant to discuss and decide the fate their sons, two little bastards who recorded themselves torturing a homeless woman to death. Since one of the brothers (Richard Gere) is running for governor, the political ramifications loom large.

While this has the makings of a compelling one-act morality play, The Dinner's deadly two-hour running time is padded with needless ambiguity, arty pretensions, ham-fisted metaphors and boring flashbacks which establish most of these characters as awful human beings. As a disgraced history teacher with mental issues, Paul (Steve Coogan), is often the most unbearable person in the room. Despite what we learn of his tumultuous past, Paul's abrasive personality & verbal venom make it tough to muster any empathy. Worse yet, he's the primary focus of the story.

The reward for our patience is the realization that we're no more enlightened by these characters or events than we were at the beginning, just like waiting on that anal-retentive poker player whose hand but turns out to be nothing. The Dinner is a joyless and frustrating endurance test that wallows in self-importance.

BLEH...LIKE COUGHING UP A HAIRBALL
Posted by D.M. Anderson at 2:53 PM