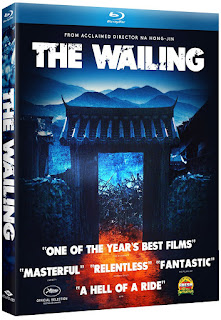 The Wailing is a South Korean horror film that’s garnered nearly unanimous praise from critics around the world. So naturally, my anticipation was high when the Blu-Ray arrived in my mailbox for review. 157 very long minutes later, I’m somewhat perplexed; there’s a lot to like about this film, though to be honest, it wasn’t what I was expecting.

Then again, maybe that was the point. The Wailing often flies in the face of horror conventions, defying our expectations of what we think is going to happen. Despite its familiar baseline story- a stranger arrives in a village; havoc ensues - this is unlike any supernatural horror film you’ve ever seen. That alone probably makes it worth checking out.

The main character isn't someone you’d expect to see in typical horror fare, either. Our hero, Jong-Goo (Kwak Do-won) is a portly local cop who doesn’t appear to be the sharpest knife in the drawer. While investigating a recent spat of brutal murders, he sometimes even comes across as comically inept. A weird young woman, Moo-Myeong (Chun Woo-hee), later convinces him an elderly Japanese stranger (Jun Kunimura) is the culprit behind the bizarre killings. Still, the old man never appears particularly threatening, even after the police begin to uncover disturbing evidence linking him with the deaths.

Meanwhile, Jong-Goo’s daughter, Hyo-jin, becomes ill, then eventually violent. Local shaman Il-Gwang (Hwang Jung-min) informs Jong-Goo the stranger is actually a demon who has possessed his daughter. He agrees to perform a ritual (the craziest exorcism you’ll likely ever see) which will save her and the village (for cash, of course). But is the old man actually the Devil? If not, then who is?


Storywise, The Wailing is all over the place. Sometimes it’s funny (intentionally and unintentionally), sometimes surprisingly touching (Jong-Goo’s love for his family renders some later scenes heartbreaking). There are brutal crime scenes, slaughtered chickens, the aforementioned mysterious woman standing naked outside the police station (scaring the bejeezus out of the cops inside), killer dogs, even a zombie or two. Ultimately, however, this is a tale of demonic possession.

Though well-shot and atmospheric, The Wailing, despite some disturbing imagery, is never particularly scary. Director Na Hong-jin skillfully cranks up the tension and suspense in the final act, but it’s a hell of a long wait for a climax and resolution that is, quite frankly, too underwhelming to justify the movie's excessive length.

Maybe I’m missing something other critics didn’t. The Wailing is a indeed a good film and I don’t regret having seen it. I was just expecting...I don’t know...something else, maybe something more haunting and disturbing that would stick with me long after it was over. Perhaps it's another one of those films that improves with each viewing, should I ever feel compelled to see it again.