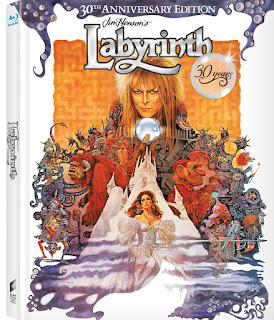 People tend to forget that few of Jim Henson’s ventures outside of his Muppets were all that successful. Labyrinth was a flat-out box office disaster, pretty much ending his film career. But like The Wizard of Oz (Henson’s obvious inspiration), it finally found an audience on home video, where it grew in stature to be one of those beloved movies an entire generation of 80s babies grew up with. This gorgeously-packaged 30th Anniversary Edition Blu-Ray is obviously intended for those with a nostalgic fondness for this film, or David Bowie at the peak of his popularity.

Nostalgia’s the key word here, because while the Blu-Ray transfer is terrific, Labyrinth is definitely a product of its time. Aesthetically, it hasn’t aged quite as well as Henson’s The Dark Crystal. The look and sound of this film - right down to Travor Jones’ score and David Bowie’s songs - practically screams 1980s. For longtime fans, many of whom will want to share this with their own kids, that’s probably part of its charm (I'd be interested to know if your kids concur).


While I was never a tremendous fan of Henson’s work that wasn't Muppet-related, it’s easy to appreciate his earnestness. Labyrinth isn’t as narratively interesting or original as The Dark Crystal, but Henson’s visual creativity is here in abundance. Viewed in the context of when it was made, it’s quite amazing what filmmakers used to accomplish without CGI. At the same time, I was sort-of saddened watching this, knowing both Henson and Bowie both passed away well before their time, not-to-mention the fact that fantasy films aren’t really made this way anymore, where creatures and sets were the work of hands-on artists rather than a roomful of computer nerds.


For die hard fans who own a previous version, this 30th Anniversary Edition disc is still probably worth the purchase. In addition to the impressive packaging (including a colorful 26 page booklet with photos, interviews, original bios and essays), there are quite a few brand new bonus features included especially for this release.

FEATURETTES:
“Reordering Time: Looking Back at Labyrinth”
“The Henson Legacy”
“Remembering The Goblin King”
“Inside the Labyrinth” (making-of documentary)
“Journey Through the Labyrinth: Kingdom of Characters & the Quest for Goblin City”

NOT BAD. THE FILM HASN'T AGED TOO WELL, BUT LONGTIME FANS SHOULD GET A NOSTALGIC KICK OUT OF IT