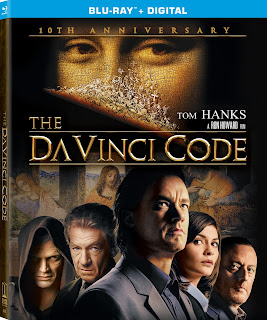 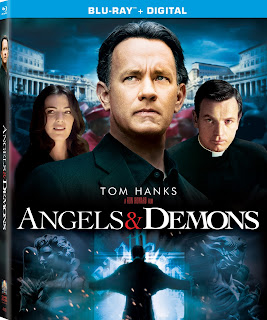 I suppose you could be a cynic and state the obvious, that The Da Vinci Code and Angels & Demons are being re-released yet again on Blu-Ray to boost awareness of  Inferno, the impending third film in the lucrative (though critically reviled) Robert Langdon Franchise. And if you’re a big fan of these films, you’ve probably already been coursed into purchasing both of them twice, once upon their initial release, then the extended editions a few years later. Since the latter editions also contained a slew of bonus features, all of which are repeated here, what purpose do these new versions really serve?

Well, there are some new bonuses, including interviews with Tom Hanks, director Ron Howard, author Dan Brown & producer Brian Glazer, as well as an extended peek at Inferno (repeated on each disc). So yeah...I guess the primary purpose is to hype the latest film, since the only other “new” extras are all the scenes deleted from the theatrical cuts but were re-inserted into the films for the extended editions. In other words, you’d have to be some kind of super-fan to triple-dip here.

On the other hand, maybe there are a lot of folks out there like me, who never got around to even seeing these films, let alone buy them. I have to admit that the trailer for Inferno (and its apocalyptic premise) was intriguing enough to finally make me curious about these two.


My expectations weren’t too high; I’d never read the novels and neither film was exactly a critical darling. The Da Vinci Code is more-or-less exactly what I expected: an overly-serious, sometimes talky & plodding treatment of an intriguing premise. While Tom Hanks as renowned symbologist Robert Langdon is watchable as always, Langdon himself isn’t a phenomenally inspired character. There’s some fun to be had watching him unlock various mysteries in order to uncover a great secret being kept by those willing to die to protect, though Scooby-Doo and the gang used to do it in a fraction of the time. Then again, Scooby-Doo, Where Are You? never raised the hackles of legions of conservative Christians who took this movie way too seriously. It’s hard to completely dismiss a popcorn picture that can accomplish such a feat.


On the other hand, I was pleasantly surprised by Angels & Demons, which is a faster-paced, race-against-time thriller. Sure, there are the usual puzzles for Langdon to solve before Vatican City is blown sky-high and a lot of speculative historical mumbo-jumbo, but there appears to be a more conscious effort to make this film more urgent, therefore more fun. Langdon himself still isn’t all that interesting, but Hanks now seems comfortable enough in the role to render him a little more than just another talking head. Best of all, sitting through The Da Vinci Code isn’t required because Angels & Demons works well-enough as a stand-alone film. Langdon is the only constant in this series. On a side note, I was also rather surprised how violent this one is for a PG-13 film.

If you’re like me and have never indulged until now, you could probably pass on The Da Vinci Code without feeling like you’ve missed the boat. It’s watchable but awfully long-winded. Angels & Demons, while not without flaws of its own (it’s a little too long, as well), is significantly better, maybe even worth repeated viewings. As for those who already own these on Blu-Ray, I’d question whether or not the new extras (mostly promotional material) are worth it.

EXTRA KIBBLES:
A majority of the bonus features included on both discs are the same as those on previous Blu-Ray releases.
THE DA VINCI CODE:
17 making-of featurettes covering nearly all aspects of the production (If you’re fan, you’ll be in hog heaven).
Select Scenes commentary by Ron Howard.
ANGELS & DEMONS:
FEATURETTES: “Rome Was Not Built in a Day”; “Writing Angels & Demons”; “Characters in Search of a True Story”; “CERN: Pushing the Frontiers of Knowledge”; “Handling Props”; “Angels & Demons: The Full Story”; “This is an Ambigram”.
Theatrical Trailers.

NOT BAD (Overall). DA VINCI IS KIND OF DULL, BUT ANGELS EARNS SOME PURRS AND IS WORTH PICKING UP IF YOU HAVEN'T ALREADY.
Posted by D.M. Anderson at 8:12 PM