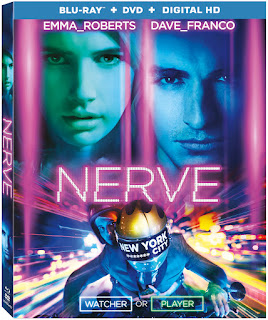 When tasked to review a particular movie, it helps to remain aware of its intended audience. Nerve is an action-thriller aimed squarely at millennials who live vicariously through social media and have turned YouTubers into celebrities. Like 2014’s Unfriended, its existence relies heavily on its appeal to an online culture that didn’t exist ten years ago. It’ll likely have a short shelf life, too. In just a few years, Nerve will seem as archaic as MySpace.

But in the here and now, Nerve sort-of works, especially if you’re part of the demographic it’s aiming at (anyone under 25 who wouldn’t be caught dead without a cell phone in their hand). In a nutshell, Nerve is a global game of Truth or Dare, minus the truth part. People can sign up online as either a player or a watcher. Players are required to use their phones to film themselves performing various dares suggested by watchers. If they’re successful, they win cash, and the more difficult the dare, the more they win.

Even though the dares become increasingly dangerous, the lure of money and instant online fame keeps a lot of them playing, such as Vee (Emma Roberts), who’s tired of being in the shadow of her self-centered best friend, Sydney (Emily Meade). Vee initially joins Nerve on a whim, but as she learns from another player she meets, Ian (Dave Franco), that simply quitting the game once you’ve had enough is easier said than done, especially if you try to warn the authorities. Whoever is running the game also manages to control every aspect of the player’s life, essentially extorting them to continue (the scariest prospect of the entire film, since identity theft is already a harsh reality).

There isn’t a hell of a lot of depth to either the story or the characters, most of whom are walking clichés. Some viewers will have trouble swallowing the entire premise. However, as far fetched as it is, it's not difficult to imagine the more intellectually-challenged of our species willing to play Nerve in real life...for the same idiotic reasons. That knowledge occasionally makes the film morbidly fascinating, at least until it lapses into a ridiculous final act akin to a WWE spectacle.

Overall though, Nerve will probably strike the right chord with the audience it’s intended for, then quickly forgotten afterwards. And since technology and social interaction are continually evolving faster than most people change their underwear, it won't be long before this film is a period piece. So enjoy the moment while it's here, kids.

EXTRA KIBBLES:
“WATCHER” MODE: This consists of a dozen and a half very short making-of featurettes focusing on actors and their characters, as well as behind-the-scenes footage.
“PLAYER” MODE: “Do You Have the Nerve?” (An amusing - and relatively harmless - version of the game which allows viewers to play); “Are You a Watcher or a Player?” (An interactive multiple-choice quiz); Player Profiles
DVD & Digital Copies