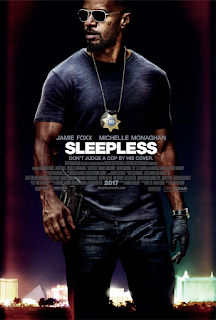 The OFFICIAL TRAILER for Open Road Films' upcoming action-thriller SLEEPLESS has arrived. Jamie Foxx stars as an undercover Las Vegas police officer who will go to extreme lengths to rescue his teenage son from the mob-controlled casino underground. Take a look at the high-stakes trailer here and catch #SleeplessMovie in theaters this spring!

SLEEPLESS stars Jamie Foxx (Django Unchained, White House Down) as undercover Las Vegas police officer Vincent Downs, who is caught in a high stakes web of corrupt cops and the mob-controlled casino underground. When a heist goes wrong, a crew of homicidal gangsters kidnaps Downs’ teenage son. In one sleepless night he will have to rescue his son, evade an internal affairs investigation and bring the kidnappers to justice.