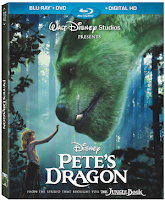 Pete’s Dragon, a reimagining of Disney’s cherished family film centered on an orphaned boy named Pete and his best friend Elliot, who just so happens to be a dragon. Families will be captivated by this magical movie followed by never-before-seen bonus features, including a revealing look at director David Lowery’s personal diary kept during the filming of “Pete’s Dragon,” the design process behind the lovable dragon Elliot, deleted scenes, a tour of the film’s breathtaking production location of New Zealand, audio commentary by filmmakers and actors and hilarious bloopers. Today’s announcement also ushers in tomorrow’s World Dragon Day and the heartwarming adventure arrives on Digital HD, Blu-ray™, Disney Movies Anywhere, DVD and On-Demand on Nov. 29; just in time to entertain the entire family this holiday season.
PETE'S DRAGON - "CREATING ELLIOT"