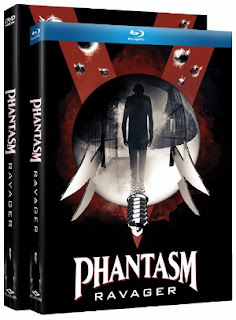 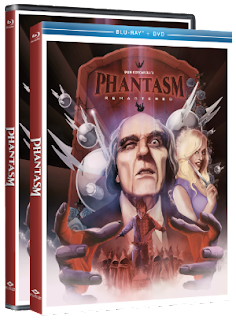 David Hartman (Transformers Prime, Roughnecks: Starship Troopers) is the first new director of a film in the popular Phantasm series history with PHANTASM: RAVAGER, which features the entire original cast including Reggie Bannister – a veteran of all five films – A. Michael Baldwin, Bill Thornbury, and Kat Lester. Angus Scrimm takes up his iconic role as the terrifying Tall Man for the fifth and final time.

PHANTASM: REMASTERED presents Mike, Jody, Reggie, and the Tall Man as they’ve never been seen before. For the first time in high-definition, follow the trio in the remastered original classic that started it all, in which two brothers discover their local mortuary hides a legion of hooded killer dwarfs, a flying drill-ball, and the demonic mortician who enslaves the souls of the damned.
Posted by D.M. Anderson at 1:14 PM