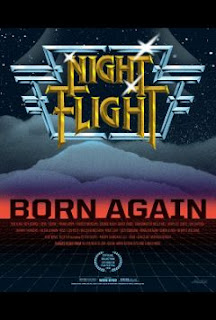 Iconic 80's TV show Night Flight is bringing its special feature film, Night Flight: Born Again to Brooklyn on November 11th to celebrate the opening of Alamo Drafthouse's new flagship location. There will be Q&A with Night Flight's original creator, Stuart Shapiro, following the screening.
Born Again is the big-screen tribute to what VH1 called "the single greatest rock omnibus program ever aired" and Brooklyn Vegan named "the most consistently weird and awesome thing on cable television in the '80s."
This 'Best Of' episode features some of the most memorable moments of Night Flight's near-decade long run including restored interviews and segments from Kate Bush, New Wave Theatre, David Lynch, Prince, Wendy O Williams, Divine, Billy Idol, Johnny Rotten, and much more Night Flight treasures from the archive.
Tickets for Born Again are on sale HERE

The Alamo Drafthouse screening coincides with the recent release of Night Flight Plus, a premium subscription channel featuring original episodes of Night Flight and select feature films of the Night Flight DNA. Along with the unique repertoire of original episodes (digitally restored from the 1" tape masters), Night Flight has worked closely with distributor MVD to add over 400 feature length films in the music documentary, concert, cult and horror genres to the channel. The channel continues to build a library of retro classics with unique acquisitions like the 1950s Gumby series.
Night Flight Plus, helmed by the show's original creator, is set to resurrect the editorial spirit of Night Flight with the same curatorial edge of the '80s for a new generation. It can be found in the app store of your Apple TV, Roku, Amazon Fire TV devices or right here: nightflightplus.com
Posted by D.M. Anderson at 3:43 PM