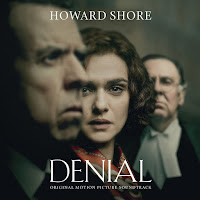 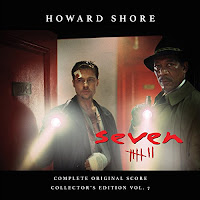 Before he became primarily known to most audiences for his music in The Lord of the Rings, Shore was sort of the to-go guy for films requiring a dark & morose music score to set the tone (no wonder he's David Cronenberg's composer of choice). Howe Records has been serving up a lot of Howard Shore lately, and two of their most recent releases showcase one of his classics, along his most recent score.

SEVEN - COMPLETE ORIGINAL SCORE
(1995, 71 min).
This is the first time the entire original score has been released on CD, and it's about time. The 1995 release consisted mostly of songs with only two tracks of Shore's haunting music tacked onto the end. Here, not only do we get the entire score, it's presented more or less sequentially. So, like the film, slow-burning tension and menace builds with every track. Also of interest is the first track, "The Last Seven Days," which was composed for the film but never actually used. Along with a booklet containing a comprehensive essay by cinema writer Peter Cowie, this disc is a must-have for fans of the film or Howard Shore.

DENIAL  - ORIGINAL MOTION PICTURE SOUNDTRACK
(2016, 39 min).
With over 50 films credits to Shore's name, he's not gonna hit it out of the park every time, such as his most recent for the upcoming courtroom drama, Denial. While the music definitely features some of Shore's trademarks, these 18 tracks (totaling less than 40 minutes) don't resonate much without the film itself to provide some context. It's competent and probably serves its purpose, but compared to some of his past work, there's little here that is particularly memorable.